Man crosses the Atlantic on a stand-up paddleboard 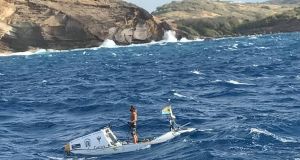 Chris Bertish on his journey across the Atlantic.

A South African man has become the first person to cross the Atlantic Ocean on a stand-up paddleboard, after completing an epic 6,520km voyage alone at sea.

Chris Bertish reportedly pulled into Antigua, in the Leeward Islands of the Caribbean, at 8.32am local time on Thursday after departing from Agadir, Morocco, 93 days ago.

In his last “captain’s log” on Facebook, which he wrote roughly an hour before he completed his nautical expedition, Bertish said: “A day I have been working toward for as long as I can remember . . . I’ve put everything on the line for this project for the last 5 years . . . Everything!”

Bertish (42), a big-wave surfer as well as a sailor, had contended with sharks, storms and loneliness on the adventure.

The board was designed by British boat designer and naval architect Phil Morrison and took six months to construct.

The front of the craft has a cabin, in which Bertish sat upright.

When storms hit, Bertish was able to take cover and stabilise the board using anchors.

The craft, capable of righting itself if it capsized, was fitted with an emergency grab bag, flares and a liferaft.

The last attempt to cross the Atlantic on a stand-up paddleboard ended a week into the trip, with the “captain”, Frenchman Nicolas Jarossay, being pulled from the sea by a rescue crew.

Bertish paddled an average of 69km a day.

He managed a gruelling 97km on the penultimate day as part of his final push.

He travelled mostly at night to avoid sun exposure and said he kept well-nourished with protein shakes, freeze-dried meals and salty jerky.

0:38 Holohan urges the public to stick with ‘tough’ restrictions for now