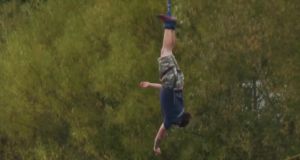 A British adrenaline junkie has given new meaning to the phrase “high tea” — writing his name into the record books in the process.

Simon Berry (24) from Sheffield in the UK, has become a Guinness World Record holder after completing the highest bungee dunk, combining his passions for biscuits and bungees.

Armed with a chocolate Hobnob and a head for heights, the ponytailed tea drinker leapt from a platform around 75m above the ground to plant his biscuit into a tea-filled mug below.

His technique involved clasping one wrist over the other to offer greater stability and precision as the snack surged towards its target.

Speaking after his feat in Bray, Berkshire, Mr Berry said: “It was pretty difficult — the team helped by getting me roughly in there in the right place, but going down and having to nail that cup of tea was pretty tricky.

“(It was) absolutely incredible — the feeling in my chest and seeing everyone’s smiles, it was fantastic.”

Mr Berry’s bungee dunk was one of a number of challenges confirmed as part of Guinness World Records Day.

Magician Martin Rees (28) from Hemel Hempstead, notched up the record for the most tricks performed in a single skydive, while Britons also wowed judges with their record-breaking ability to identify Queen songs, comic book superheroes and Oscar winners against the clock.