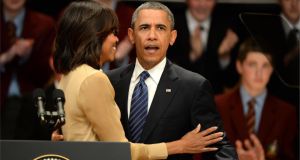 Michelle Obama with her husband US President Barack Obama, at the Waterfront in Belfast. Photographer: Dara Mac Dónaill / The Irish Times

President Barack Obama does have rare oratorical abilities, and so does the first lady, his wife Michelle. Yesterday they even succeeded in breaking through the “meh” factor.

Katie McCorry, Catherine Shaw and Celine Maxwell, all 16, from St Rose’s second-level school in nationalist west Belfast, were looking forward to the arrival of Mr Obama in the Waterfront Hall yesterday morning.

However their eagerness wasn’t half as much as their teachers, Angela Grant and Geri Conlon.

This was before he spoke.

Of the “whatever” generation, Ms Conlon mused: “We’ve been talking how he is the most important man in the world and they’ve been going, ‘You know, it is only the president of America, what’s the big deal!’.”

Excited teenagers
An hour later though, after he spoke, they were still in shy teenage mood but they were excited, animated in particular by a delivery from a US president that whatever about the detailed depth of its content was undoubtedly electrifying.

From his opening “Hello Belfast, hello Northern Ireland”, he played it like a rock star. He had totally smashed that frustrating carapace of teenage indifference.

The girls were impressed, inspired even.

This was a speech mainly aimed at young people. There were 2,000 people in the hall but 1,500 of them were students, aged 16 and over.

In effect, the morning was Mr Obama telling them that their parents and grandparents in various guises had parts to play in creating and resolving the conflict, and now it was their turn to deal with the next big hurdle, tackling division and taking down the walls that divide the communities.

Mexican wave
There were loads of politicians present.

Gerry Adams and Sammy Wilson of the DUP even joined in the Mexican wave started by some of the boisterous students before the Obamas hit the stage.

“Often in Northern Ireland we hear about our past. People have many genuine stories and they are definitely what make our history so important,” Hannah said, holding to the theme of the morning, “but truthfully, we should not let the past pull us apart and stop us moving forward.”

When the first lady came on stage, the place erupted.

Dressed in an oatmeal top and tan slacks, she thanked Hannah for her welcome and agreed: “You will be the ones who take charge. I don’t see a room full of teenagers, I see people who will move the world forward.”

Moneygall recalled
The place could hardly contain itself when the president came to the podium.

He started off by thanking everybody who needed thanking.

He reflected on the visit to Dublin and Moneygall two years ago and wished that in his early Chicago political campaigning days, he had known that his great-great-great grandfather was an Offaly man.

O’Bama was fine but for Irish-American voters in the Windy City, “what kind of name is Barack?”

He spoke of how families crowded into pubs in the Cathedral Quarter to hear “trad” music and how students “lounge at cafés, asking each other, ‘What’s the craic?’”

And the wonder of it, it is partly true, and that was a message that was conveyed to the young people: they may not realise it but they live in an exciting country.

He spoke of bringing down the peace walls, of creating a shared society and of the US continuing to assist that project. But the new generation now must be prepared to take the lead.

“The first steps are the bravest,” the president added. “The rest, now, are up to you.”