Mrs Obama and girls treated to Bono, fish and chips and a pub lock-in 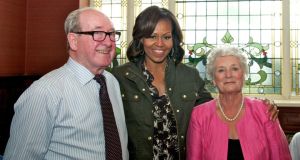 Michelle Obama’s lunch with Bono in Finnegan’s pub in Dalkey wasn’t listed on the official itinerary but it was the worst-kept secret in town. By the time the singer arrived just before 1pm with his wife Ali Hewson and two sons, the barricades were bursting behind the weight of the expectant crowd.

“I thought this was a secret,” he said as people cheered and shouted his name.

The stern-faced secret service men regularly asked the gardaí to push the barriers farther away from the entrance to the pub, which hurt the feelings of some locals.

“We’re not a threat to anyone,” said one older woman to her companion who readily agreed. “Sure, we’re kind of harmless,” she said. And no one could say the four little girls who wanted to present their posies to Mrs Obama were a threat, but they didn’t get near the first lady either.

At 1.20pm, the fleet of black armoured cars pulled up outside the pub. A lucky few caught a glimpse of Mrs Obama as she entered but Kate Keena (8), Cara Bourke (10), Daisy Little (8), and Eve Smyth (5) were left holding their posies.

Like most of the crowd, they decided to wait to see the Obamas’ exit. They waited. And waited. Every so often there was a flurry of activity and a secret service man would put his hand on the door of Mrs Obama’s car but would then withdraw it.

They finally emerged just before 3pm. The four girls called her name and waved their posies. Mrs Obama waved back and was gone. Chef Paul Finnegan looked like he had just finished his Leaving Cert.

“I’m very happy,” he said breathlessly. “She went for the fish and chips, very traditional.” The girls also had fish and chips while Mrs Obama chose a lobster starter. His brother Donal said Bono came to the pub a lot and he wanted Mrs Obama to have an Irish pub lunch experience.

The Obama girls may have looked bored in some photographs but Mrs Obama told him they had a “fantastic” time. “Her girls were thrilled with it and will be back.”

Up to 60 local people enjoyed a peculiar type of lock-in during the event but the VIPs sat together down the back. Local girl Amy Luke helped serve the group and got a secret service badge for her troubles.

“It was mental this morning,” she said. “All the staff had to line up and be body-scanned before we could go in.” But did they leave a tip? “Hmm,” she said, perking up. “ I don’t know yet.”

As soon as the Obamas left, the pub doors reopened and Bono and Ali Hewson found themselves in the middle of a scrum. Asked what they talked to the Obamas about, Bono said “everything and nothing. It was a family lunch”.

The four girls with the posies were happy as they got secret service badges, explained Eve Smyth’s mother Miriam. Eve had already forgotten about Mrs Obama. “Can we go to Jack’s house now?” she said.