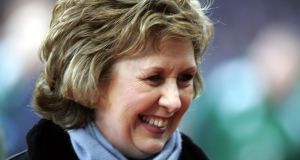 A bridge on the M1 motorway near Drogheda has been renamed the Mary McAleese Boyne Valley Bridge in honour of the former president’s work in the peace process.

The decision to rename the bridge was taken jointly by Louth and Meath councils.

Today’s renaming event was attended by former paramilitaries as well as politicians from both sides of the Border.

Speaking at the ceremony, Taoiseach Enda Kenny said Mrs McAleese worked diligently to ensure that all communities were “included, and felt included, in the transformation” from war to peace.

“The work Mary McAleese and Martin McAleese did for people — on both sides — changed minds, attitudes and lives across the island and across the communities.”

“In her presidency, for those of the Unionist community, Dublin became not an alien city to be feared and avoided, but a place of real and warm welcome particularly Aras an Uachatarain itself. She made it that from the day she took office six months before the Good Friday Agreement.”

“The relationship between two islands and its peoples changed profoundly thereafter,” he said.

2:29 ‘Democracy has prevailed’ - Joe Biden is sworn in as 46th US President

0:50 At least two dead after explosion in Madrid city centre

1:15 'We will be back in some form' - Trump departs the White House

‘Democracy has prevailed’: Joe Biden sworn in as 46th US president 17:59
‘We’ll see each other again’: Trump bids farewell to Washington 17:58
Shannon Airport passenger numbers tumble in face of Covid-19 17:56
Boyfriend of woman in Starbucks racial incident wrongly accused of slur 17:55
Man jailed for repeatedly raping a child over a two year period 17:53