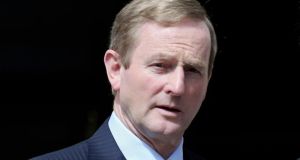 
An attempt to allow Fine Gael TDs and Senators a free vote on the abortion Bill failed to get off the ground last night when it came before the parliamentary party.

Dublin South TD Peter Mathews, who has led the campaign for a free vote, was unable to get a seconder for his motion that would have allowed parliamentarians to vote according to their conscience.

Consequently, he had no option but to withdraw the motion and it was not put to a vote. In a debate where Mr Mathews spoke at length and over the allotted time, there were interventions from several TDs appealing for calm and reflection within the party including John O’Mahony, the Mayo Deputy who has expressed serious concerns about the Bill. Several TDs, speaking privately, said the debate descended into “farce”.

The failure to get the motion put to the meeting represented a serious setback for the group of TDs and Senators within Fine Gael who are opposed to the Protection of Life During Pregnancy Bill. They have sought a relaxing of the three-line whip (compulsory support for the legislation with serious consequences for not doing so) imposed by Taoiseach Enda Kenny.

However, Mr Kenny has consistently said that no free vote will be offered, as has been done by Fianna Fáil leader Micheál Martin.

Party chairman Charlie Flanagan last night said: “What the Taoiseach has repeatedly said stands. There will be no free vote on the legislation.”

Debate on the seminal legislation which will allow abortion in limited circumstances – including a risk to life from suicide – will begin in the Dáil today. The first vote is expected at the conclusion of the second stage next week.

Already three Fine Gael parliamentarians have indicated they will vote against the Bill in the Dáil. They are Mr Mathews, Senator Fidelma Healy-Eames and her Galway West colleague Brian Walsh who yesterday formally declared his intention to oppose the Bill – something he already strongly indicated three months ago.

Opposing the Bill
Mr Walsh said yesterday that he believed at least eight and perhaps more than 10 Fine Gael TDs and Senators would not support the Bill’s passage.

“I can only speak for myself. Approximately 30 members of the parliamentary party have very serious concerns,” he said. “I don’t believe all 30 will vote against but on the basis of very serious conversations I have had I believe that somewhere north of eight will not support it. It has been difficult for me. I have two young children and I know the consequences of voting against the whip. But it came down to a choice between my conscience and my career.”

Some members hope that the issue of a free vote might be revisited next week especially if the numbers within Fine Gael publicly opposing the bill reaches a critical mass. Others with reservations about the Bill include John Paul Phelan; Sen Paul Bradford; Peter Fitzpatrick; Lucinda Creighton; Damien English; Michael Creed; Billy Timmins; Sen Terry Brennan; Michelle Mulherin; and Terence Flanagan.

Those arguing for a free vote have won support from those who have not indicated they will oppose the legislation. Dublin North TD Alan Farrell yesterday said that acceding to the request for a free vote would “provide some comfort for members whose personal beliefs would deter them [from supporting the Bill]”.