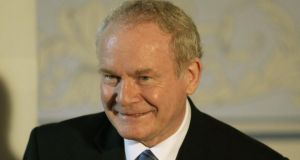 Martin McGuinness tweeted: “Resist celebrating the death of Margaret Thatcher. She was not a peacemaker but it is a mistake to allow her death to poison our minds.” Photograph: Reuters/David Moir

The Sinn Féin Árd Comhairle member made his comment following republican celebrations at Free Derry corner in Derry and in west Belfast on Monday night.

Mr McGuinness yesterday tweeted: “Resist celebrating the death of Margaret Thatcher. She was not a peacemaker but it is a mistake to allow her death to poison our minds.”

The SDLP MP for Foyle Mark Durkan criticised the celebratory demonstrations, as did the Alliance leader and Minister of Justice David Ford.

Mrs Thatcher was prime minister in 1989 when the UDA, with official British collusion, murdered Belfast solicitor Pat Finucane. His son Michael, also a solicitor, wrote in a tweet wrote on Monday: “Amidst all the clamour to be clever today Elvis Costello definitely said it 1st & best: ‘I will stand on her grave and tramp the dirt down.’”

In a later tweet he qualified his remarks: “I’m critical of what she did & what she represents. Haven’t attacked her personally, which, by the way, she did with me.”


‘Depravity’
The Traditional Unionist Voice leader Jim Allister, referring to the celebrations of her death, said: “What an insight it was into the depravity of IRA supporters. Their ghoulish street parties in Londonderry and Belfast can only be described as depraved.

“Given that many of the parties appear to have taken place on public roads, I will be watching with interest to see if those involved are prosecuted by the PSNI. Given the heavy-handed approached adopted against flag protestors, I cannot help but wonder if the police will be as robust with republicans.”

He added: “The comments from co-First Minister McGuinness on the issue need to be taken with more than a pinch of salt. What on Earth gives a self-confessed IRA commander the right to comment on what makes someone a ‘peacemaker’? McGuinness’s IRA did more than any other group to rob peace from the streets of the United Kingdom.

“And if McGuinness genuinely does believe that celebrations on the death of Baroness Thatcher are wrong will he also say that the IRA attempt to murder her 30 years ago was wrong?”

The Northern Ireland Office confirmed yesterday the British union flag will fly at half- mast on certain “government buildings” in Northern Ireland when Mrs Thatcher's funeral takes place next Wednesday. This will include Belfast City Hall and Parliament Buildings, Stormont, even though it is not an officially designated day for flying the flag.

While Belfast City Council decided last December to limit the days the flag flies over City Hall to 15-18 designated days, an NIO spokeswoman said the regulations were the flag would be hoisted at half-mast after the death of a serving or former British prime minister.

1:02 Varadkar confident phase two of easing of Covid-19 restrictions will go ahead as planned