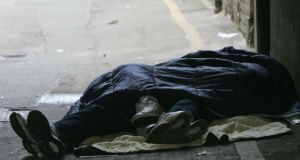 Threshold Cork said an Access Housing Unit in the city had helped 38 people to exit homelessness since it was set up late last year. Photograph: Bryan O’Brien/The Irish Times

Over 70 per cent of people who are homeless in Ireland are capable of independent living but access to more housing is required if the problem of homelessness is to be addressed, the launch of a new service for homeless people was told today.

Diarmaid O’Sullivan, service manager for Threshold Cork, said the establishment of an Access Housing Unit in the city by Threshold was a significant step towards dealing with the issue of homelessness in Cork.

Mr O’Sullivan said since an Access Housing Unit was established in Cork last autumn, it had assisted 38 people to exit homelessness, the majority of whom had been staying in emergency homeless accommodation.

“It might sound obvious but the greatest challenge homeless people face is finding a place to live - they can often spend many months if not years in hostels but working closely with landlords and other homeless services, Threshold can house people in a matter of months.”

Threshold was founded in 1978 by Fr Donal O’Mahony as a national housing charity.

Threshold chairperson, Senator Aideen Hayden, pointed out that preventing homelessness was the most cost-effective solution for the state.

“The average cost of emergency hostel accommodation per person in Cork is about €23,000 a year whereas getting someone out of homelessness with tenancy support from a service like Access Housing Unit is €8,000 so it’s cheaper to deliver a permanent housing solution.”

Minister for State, Kathleen Lynch who launced the new service which is funded by the Dept of the Environment and Cork City Council to the tune of €160,000 per annum, paid tribute to landlords for their contribution in helping to move people out of homelessness.

She instanced the case of one landlord who agreed to provide accommodation for a former prisoner released after serving a long jail sentence which helped provide a stable environment for the man and enabled him to re-integrate into society.

Restrictions on religious services to stay after archbishops meet Taoiseach 20:45
UK economy will not return to pre-Covid levels in 2021, IMF forecasts 20:42
Gaël Fickou’s switch to wing a nod to what France expect from Ireland 20:39
First full moon on Halloween night since 1955 will be rare ‘blue moon’ 20:34
Macron condemns ‘Islamist terrorist attack’ on day of four knife attacks against French targets 20:34