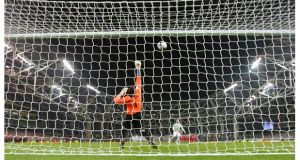 Last year’s beaten finalists, who just about shaded the contest over the course of 120 minutes, needed penalties to see off Rovers and goalkeeper Ciaran Kelly emerged as the hero after an extraordinary shootout.

Kelly saved all four of Shamrock Rovers’ spot-kicks while Sligo’s Gary McCabe and Eoin Doyle converted to claim the title. Kelly might have been called for straying from his line, but Shamrock Rovers manager Michael O’Neill had no complaints despite his side missing out on the double.

Wwith all the talk of ticketing policy at the Aviva Stadium recently, the FAI appear to have got their pricing just about right for this final. Charging €10 for adults and €5 for children was a forward-thinking initiative and the association were rewarded when 36,000 paying customers made their way through the turnstiles.

And, despite the lack of goals, those fans were treated to some top-quality entertainment.

Twigg twice had scoring opportunities for Rovers in the opening 15 minutes, although he may well have played in a better-placed teammate on both occasions. First the centre forward picked up a through ball, turned smartly and hit a shot that whistled over the crossbar.

Moments later, Twigg fashioned another shooting chance but sent his effort well wide with the unmarked Billy Dennehy screaming for the pass on the outside.

Sligo then wrested the initiative from the Tallaght side and were denied the lead when Romuald Boco’s powerful header was expertly tipped onto the crossbar by Alan Mannus. Just before half-time, Rovers found themselves in more trouble from a corner when Gavin Peers was left unmarked at the back post but the defender miscued his header from close range.

Both sides continued to pour forward after the break, with Sligo going closest to breaking the deadlock. Crisp, incisive passing cut the Shamrock Rovers defence open on a number of occasions but McCabe and Doyle both failed to hit the target while Boco was again foiled by Mannus.

Alan Keane then raced clear of the Rovers defence, crossed over Mannus but the ball just eluded Doyle at the back post.

Rovers almost took the lead against the run of play, with Keane forced to clear the ball from his own line before Dennehy and Twigg pressed Kelly into action in the Sligo goal.

Sligo again enjoyed the better chances in extra-time, with Keane firing into the side netting, but try as they might they just couldn’t get the winner. And Rovers, who finished with 10 men after Stephen Bradley picked up his second yellow card, held on for penalties.

But they could find no way past Kelly in the shootout and those strikes goals from McCabe and Doyle were enough for Paul Cook’s side.

Three whales wash up on Donegal beach 12:18
Two arrested after €130,000 cocaine and cannabis seizure in Co Mayo 12:12
Ireland v France in doubt due to hotel quarantine policy 11:47
France bans short domestic flights on routes that can be done by train 11:33
Government to add US and four EU countries to quarantine list 08:31