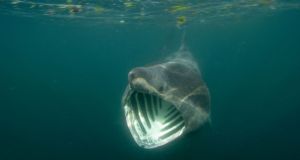 A kayaker has captured some rare footage of a large basking shark off the Donegal coast.

Graham Smith was fishing from his tiny vessel not far from the shore when he encountered the fish.

At one stage, the shark follows Smith, apparently feeding in the slipstream of his vessel.

“What an amazing experience a baskin shark made 3 attempts to swim with my kayak and I only realised what he was at on his 3rd attempt, he was so close and seemed to like being beside the kayak,” Smith, who posted his video on Youtube, said.

The basking shark or liabhán chor gréine (great fish of the sun) is the second-largest fish in the ocean, frequently reaching up to 10 metres in length.

Once hunted to the point of extinction for the oil in their liver, the sharks are now back abundance in Irish waters thanks to an EU-wide protection order.

Characterised by their large dorsal fins and docile surface swimming behaviour, they survive by filtering plankton from the water.