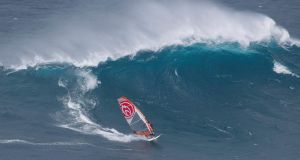 Katie McAnena windsurfs the Pe’ahi wave known as Jaws, off the Hawaiian island of Maui: “There were big gaps in the swell, so I timed it and it just seemed like it was right.” Photograph: John Carter 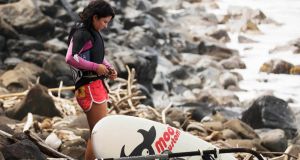 Katie McAnena is four times Irish female windsurfing champion and was on Maui as part of her training for the professional competitive season. Photograph: John Carter

A Galway doctor has become one of the world’s first women to windsurf the infamous Hawaiian wave known as “Jaws”.

Dr Katie McAnena (26), who is on a gap year from medicine, spent several hours late last week on the big wave surfing break at Pe’ahi in Hawaii, as did New Caledonian windsurfer Sarah Delaunay (24).

The wave formation caused by an underwater ridge off Maui can reach over 18 metres or 60 feet, and is considered to be as unpredictable as a shark attack – hence its nickname drawn from the film Jaws .

The wave break appeared in the opening sequence of the James Bond film, Die Another Day , and has attracted the world’s best surfers. As it breaks in rapid sequence below a steep cliff, most use the “tow- in” method by jetski to reach it.

However, Dr McAnena launched by jumping from a cliff base, along with several male surfers who were in the area.

“There were big gaps in the swell, so I timed it and it just seemed like it was right,” she said, speaking to The Irish Times from Hawaii.

She had conducted a reconnaissance with several colleagues earlier in the day and had returned to base to make pancakes.

“As the day progressed and it hit noon, the conditions just seemed to be better, and so I grabbed my gear and went for it. I’ve no idea how big the wave break was, but I was very cautious and stayed on its shoulder.

“The sound and the feeling of it going through my bones was extraordinary, an out-of- body experience,”she recalled. “I haven’t managed to sleep since.”

Dr McAnena is four times Irish female windsurfing champion and was on the island as part of her training for the professional competitive season.

“I’ve been obsessed with this wave for the longest time, but I never believed in my wildest dreams that I’d be doing it, let alone so soon.”

Irish windsurfing champion Finn Mullen, who surfed “Jaws” three years ago and again this year on his stand-up paddle board, paid tribute to Dr McAnena, saying it was an extraordinary achievement.

“Like Aileen’s off Clare and Mullaghmore, Co Sligo, there are only a few of these wave breaks in the world,” he said. There are no records to hand of women who had previously surfed this wave, he added, but Dr McAnena and Ms Delaunay would be the first to surf it in recent times.