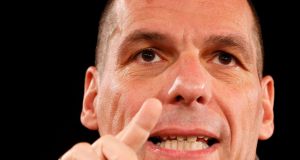 On the streets of the small city of Corinth, deemed the weathervane of Greece’s troubled politics, it is difficult to find people who admit to still backing Yanis Varoufakis.

He said “the election will either condone or legitimise the Irish people’s violation at the hands of an unscrupulous local regime and a brutal European Central Bank”, in words circulated freely on social media.

Back in Greece, however, there was silence. His mercurial star has been on the wane since he resigned from Alexis Tsipras’s government last summer, accusing it of betraying Greeks who had rejected EU-imposed austerity.

“While his theories are appealing, in practice he was not able to realise them. I heard that he had said something about Ireland but I wouldn’t necessary advise people to listen to him,” said Evanthia Evgenidi.

“He has an unbelievably large ego. It’s all about him. Whatever ideas he had, maybe some of them were good, but we never heard them in reality,” the 46-year-old complained.

Vaso, a woman in her 50s who declined to give her surname, was no more impressed. “Because of that ego, he couldn’t co-operate to bring his ideas forward. He’s like a mountain shepherd leading a flock somewhere. If some sheep fell off a cliff, he’d never even notice.”

However, he is not without allies. Thanasis Dimakis, a freelance digital marketer, believes Varoufakis is still a voice that should be heeded: “Most of the political parties and institutions are not credible in Greece.”

Early on in his five-month tenure as minister he enjoyed unparalleled popularity – fuelled by the contrast between his outsider rock-star biker image and the conventional, besuited world of the Eurogroup.

Today, however, Varoufakis’ record in office is deeply contested in Greek politics and society, to a degree that many outsiders, including his Irish support base, may not appreciate.

“For those who haven’t suffered the consequences of Varoufakian game theory in action, his analyses still sound attractively subversive. But my sense is that people in Greece, explicitly or implicitly, recognise the enormous cost of Mr Varoufakis’s disastrous tenure and realise that while they are stuck with the bill, he is touring the world as the apostle of the Athens spring,” said Yannis Palaiologos, a journalist with Kathimerini newspaper and author of The Thirteenth Labour of Hercules, which looks at how Greek found itself at the eye of a financial storm and has struggled to pull itself free.

Varoufakis claims that Greece was the victim of an EU-led coup. Many Greeks, however, blame him. Seven months later, the maximum weekly cash withdrawal limit remains at €420.

“[It] was a game of chicken, gambling that the US or Angela Merkel would intervene and force [German finance minister Wolfgang] Schäuble to give in,” he added. When the cavalry failed to arrive, Varoufakis had no alternative.

Today, the economics professor-turned-minister has little or nothing of a political base left – loathed even more by the political spectrum to the right of Syriza. He was always too reformist for those on Tsipras’s left.

His Democracy in Europe Movement 2025 (DiEM25) was launched amid much fanfare in a Berlin theatre last week, but met with a muted response at home.

“The majority of Greeks are fed up with theory. [They] have realised that within the current Eurozone context, there is no alternative policy other than the one being implemented,” argues Dimitris Rapidis of Bridging Europe, an Athens-based think tank.