Women and girls trafficked to Ireland for sham marriages – report

Nearly two-thirds of reported incidences of people trafficking were subjected to sexual exploitation. 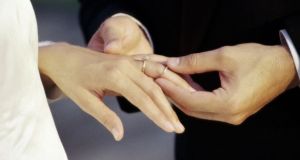 A 1 7-year-old girl was trafficked into Ireland after her brother had sold her for €300 in order for her to be married to an older man.

Gardaí interviewed 47 Latvian women who had been trafficked to Ireland solely to enter into a sham marriage with a non-EU citizen, a new report has revealed.

The women had all been paid upfront for entering into the marriages and none of them complained, according to the Immigration Council of Ireland. Many had been recruited through Facebook.

In another example of a sham marriage, a 17-year-old Slovak girl was trafficked into Ireland after her brother had sold her for €300 in order for her to be married to an older man. The girl was rescued and received support from Tusla. Three suspects were arrested in the case.

Nearly two-thirds of reported incidences of people trafficking to Ireland were subjected to sexual exploitation.

Of the 311 presumed victims of trafficking reported to or detected by An Garda Síochána in the last five years, 197 (63 per cent) were women or girls who were trafficked for prostitution.

Another 82 were trafficked for labour exploitation including 23 Romanian men who were exploited in a waste recycling plant.

Approximately 50 were women were trafficked for the purposes of being an au pair.

The report by the council is part of a pan-European project, TRACKS (Trafficked asylum seekers’ special needs).

It found the number of people being trafficked for labour purposes is on the rise partially because of the improving economy and the problems non-EU nationals have in getting visas. The main sectors for trafficking are agriculture, fisheries, domestic work, home care and restaurants.

A new trend in trafficking concerns pop-up car washes run by organised criminal groups, in particular from Romania, recruiting vulnerable unemployed men with the promise of a well-paid job in Ireland.

However, the report stressed that the reported figures do not reflect the real scale of the phenomenon of human trafficking in Ireland, due to difficulties in the identification of victims of trafficking.

The report echoed recommendations made by the Council of Europe’s Group of Experts on Action against Trafficking in Human Beings (GRETA) in its country report on Ireland published a fortnight ago.

GRETA called for urgent action to streamline the identification process so asylum seekers can be formally identified as victims of trafficking even if they have an asylum proceeding pending.

Immigrant Council of Ireland’s chief executive Brian Killoran said the State is failing to meet the needs of trafficking victims.

He pointed out that there was a lack of recognition of the special needs victims of trafficking seeking protection compared with other categories of asylum seekers.

“They should not languish in direct provision while waiting for formal identification, as it is only at that point they can access the supports to which they are entitled. They also need female-only accommodation where they feel safe,” he said.

The report is published by the Immigrant Council of Ireland ahead of EU Anti-Trafficking Day on October 18th.