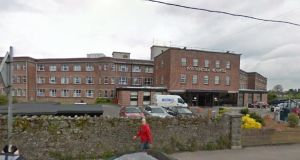 The driver was taken to Portiuncula Hospital Ballinasloe where she was pronounced dead. Image: Google Street View

A woman has died in a two-car collision in Co Roscommon this morning.

The 49-year-old driver was killed in the crash at Cornafulla on the old N6 road between Ballinasloe and Athlone at about 9am.

She was taken to Portiuncula Hospital Ballinasloe where she was pronounced dead.

The man driving the other car has been taken by emergency services to Portiuncula Hospital . His condition is described as not life-threatening.

Gardaí are at the scene and have closed the road for technical examination. Diversions are in place.

Gardaí are appleaing for wtnesses to contact them at Roscommon Garda Station on 090-6638300.

1 No obvious signs of injury on remains of McGinley children
2 Snow expected as Met Éireann issues status yellow weather alert
3 Fine Gael to stress economic warnings as campaign enters crucial week
4 Body of a man found in Letterkenny
5 ‘It’s something you don’t want to hear. You always think it happens in other places’
Real news has value SUBSCRIBE