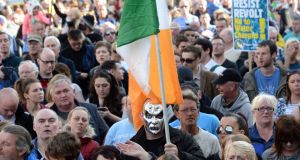 Mother of two Suzanne O’Flynn (36) was one of the residents of Ashbrook Heights in Togher in Cork city who prevented Irish Water from installing meters in the estate last April.

She will be speaking at today’s protest in Cork.“I’m not a member of any grouping but I was asked would I speak and I said I would.

“I have concerns about the health risks associated with radiation from the smart meters but as well as that there is no way I am paying for dirty water and the water is still bad up where we are.”

Ms O’Flynn, who is hopeful that thousands will turn out in Cork city today, explained that her two-year-old son has eczema and needs to be bathed every night so paying for water isn’t an option for her given how much water she uses.

“Our water is not for sale and I will not be supporting a private company and I have no intention of giving them my PPS number.”

“I hear the argument all the time that water cannot be supplied for free, that we should pay for it. We do. I will not pay a private company, Irish Water, for water that I have paid for already.

“I’ve also paid an increase in motor tax going back about 25 years. If I remember correctly, it was in the late 1980s when the Government put up motor tax. They tried to bring in water charges then and what they said was that they’d have to increase motor tax and they did so.

“The Government of this island which is paid by the people of this wet nation should listen to what the people are saying – “No water charges by a private company.” Not reductions, not spaced payments, not water allowances. Plain and simple, no water charges by Irish Water. No double payment.

“I am marching in Letterkenny tomorrow for one reason only: because most people can’t afford it. People forget that the Celtic tiger by-passed Donegal apart from a few small pockets.

“We have four children and we can’t afford it. I have talked to women about this and they cry because they can hardly put food on their tables for their children nevermind find another €600. I am one of the lucky ones in that my husband now has a job. But he was unemployed for three months and we were hardly able to make ends meet. I am marching because I know in my heart of hearts that Irish Water is going to be privatised. We can’t let that happen. We have to stand up to the Government on this issue.

“As I speak I am looking outside my window because I know Irish Water are calling to my house in the next few days to install water meters.

“I will physically stop them from doing that. I will never pay for water because I feel we are already paying for it.

“That is why I am marching in Letterkenny and I would ask for as many people to join us as possible. We have to stand together on this issue.”

“There are two aspects to this march: there’s a lot of anger and there’s a principle to it as well.

On the anger front, in the last seven or eight years the working class people in this country are after getting absolutely hammered with all the taxes that have come on stream, the property tax and all the charges that went up and, as well, all the things that we lost.

I think most people struggle from week to week to balance the budget. The bills come in and you’re paying this bill this week and that bill the next week.

On principle, I’m totally opposed to the whole water charge thing and what’s even more worrying to me is that if this manages to get through, what will definitely happen is that they’re saying someone like me and my wife Susan and our children Catherine (12) and Michelle (6) will be paying €278 but I’ve no doubt that four, five years down the road we’ll be paying upwards of €1,000.

To be honest, the whole thing is farcical, what’s after happening, the Irish Water thing is a joke.

The big thing is that people can’t afford it. I’m hoping we can get the charge abolished and, if it’s not abolished, there’s no doubt about it, I won’t pay it.

“I recently attended a protest meeting in Boyle. Something at that meeting struck a chord with me. There were several pensioners there. These people have done their stint. It’s their time to relax. They shouldn’t have to worry about water. Well these pensioners were genuinely terrified. It was utterly disgusting to hear them say they will be conscious now, every time they take a bath, boil the kettle and fill a hot water bottle. There was genuine fear among them about leaks, large bills and call out charges. I was angry coming to that meeting but after it I was seething.

My protest against Irish Water and water charges is nothing to do with water. It’s about taxation. If we tolerate this, then something else will be next.

We’re already paying tax for water. Instead that money is bailing out gamblers in Europe who backed the wrong horse. The boys in Leinster House can’t see any problem. Their attitude is ‘Sure the peasant thicks will keep paying. They’re too stupid to question us. Water doesn’t fall from the sky you know………’ ‘If you can afford a fancy phone, you can pay for water’, said Joan..

I am involved in Boyle Celtic soccer club. Parents will ultimately pay if clubs are affected. We depend on voluntary contributions. If your child goes to GAA, scouts, soccer, will you have to pay three times.

I’ve had enough of the Government and their stealth taxes. It’s time to take a stand.

“d I am a single mother of three children. I’m originally from Southill but I now live in Corbally and work as a team leader in The Southill After Schools Club. I am taking part in Saturday’s protest for many reasons.

Firstly, Irish people pay €1.2 billion per annum for water through taxes yet there has been very little done in the way of infrastructure.

We the tax payer accepted half hearted attempts at rectifying problems, however ineptitude seems to be common among the ruling classes. Unfortunately, so does lavish overspending.

I have seen it in Southill, a place that didn’t see the Celtic tiger, children that were hungry even then. The sheer arrogance of these people. People from all sections of society and social classes are marching, they are furious with having to pay tax after tax but have still stoically paid up.

And now they want us to pay again!. How can they look at themselves, when they know full well the burden the people have carried paying out over the banking scandal and having to pay out a further €1.2 billion a year through VAT and motor taxation and property tax.

Surely this should have been enough to guarantee us, at the very least, safe water. We pay enough for it. I have seen first hand the effects of poverty on children. To be threatened with water shut offs for not being able to afford a second time is heinous to me.”