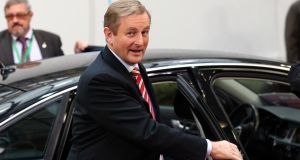 Taoiseach Enda Kenny has said it would take a four-point rise in the top rate of income tax to cover the loss of revenues if water charges were scrapped. Photograph: Getty

The controversy over Enda Kenny’s assertion that the top income tax rate would have to rise four points if water charges were ditched goes to the heart of the Government’s financing problems as it decides what to do next.

Strangely, Kenny is both right and wrong on this point. Predictably, as with everything concerning Irish Water, it’s not straightforward.

Looking purely at the cash position of the exchequer, this particular sum does not add up. Domestic water charges are due to raise around €300 million next year.

On the other side of the equation each one point rise in the top income tax rate yields about €230 million.

This is not to say that the €300 million cost of ditching water charges would be easily filled - but in terms of pure cash accounting it would not take a four point income tax rate hike.

But what the Taoiseach was referring to, however, was something different.

Irish Water was set up in a way that keeps spending on its operations and investments off the State balance sheet.

What does this mean? It means the Government still has to raise this money, but that it is not counted as part of Government finances by the EU when it judges our exchequer deficit and debt each year.

This gave the Government more scope in framing the Budget for next year, while still staying within the target of getting borrowing in 2015 under 3 per cent of GDP.

If water charges were scrapped, Irish Water would become a largely State funded entity - with the exception of non-domestic water rates. It could no longer be counted as an entity separate from Government under EU rules.

This means pretty much all the money the State pays towards Irish Water’s operations and puts in to help fund investment would have to be counted for EU purposes in the debt and deficit sums.

Department of Finance calculations suggest around €800 million to €850 million in spending on Irish Water is now “off balance sheet” and would have to be counted under EU rules as part of our deficit and debt if there were no water charges.

This is where the 4 point rise in the top tax rate comes in. On simple maths, a four point rise would raise more than €900 million - though by hitting activity levels the net yield of such a big increase would be a bit lower.

So Kenny’s sums were based on what would need to happen to hold to the same EU deficit targets set out in the Budget, while abolishing water charges.

There would be other ways apart from hiking the top tax rate to fill the gap. But given the total amount of new tax and spending measures in the Budget for 2015 was €1 billion - and the amount of money in play here is €800 million plus - it would not be easy.

If water charges were scrapped, the decision next year would be whether to borrow more, raise taxes or cut spending - or a combination of all three.

A decision could also be made to spend less on Irish Water, although part of what was done through establishing it was to keep the money spent on water via the old local authority system off the State’s books.

So the scope to save money quickly here is probably limited.

The key thing is the way this has been structured means there is no easy financial fix for the Government.

So Kenny is right that ending domestic water charges will leave a big hole in the budget sums - but this particular hole is one the Government dug all by itself.