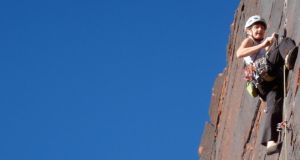 Perhaps the seasoned mountaineer was right, or was trying to be kind to her and her three fellow first-year students. Either way, Sheridan and company ignored him and joined the UCD climbing club.

“We had never actually seen anyone on a rock face before,” she says, recalling her first trip to Dublin’s Dalkey quarry where webs of rope were woven in patterns over the granite.

Sheridan, 40 years later, is to Irish mountaineering what Sonia O’Sullivan is to athletics or Katie Taylor is to boxing.

Had there been one female among the eight climbers on the first Irish Everest expedition in 1993, it would have been the 62-year-old. Yet it’s a mark of her philosophy that Everest would never be high on her list.

“It is taking its toll – 16 Sherpas who lost their lives in an avalanche last April were all out preparing routes for the coming season,” she says.

“It’s very difficult to climb it now as an independent climber, as escorted expeditions have really taken over. You may have to be very fit, but it’s not mountaineering . . . just as when people pay to go into space, they are not astronauts.”

Sheridan may have got the bug on the Beara peninsula, where the family lived for a time and where her father, a school inspector, would take the family of seven on walks. She attended boarding school in Laurel Hill in Limerick.

In 1974 she had her first rock climbing experience on one of the “gems of Antrim” – Fair Head. She put her first route up here in 1975, named it “Black Thief” and graded it “VS” or very severe.

In 1977, the couple were part of the Kishtwar Himalayan expedition, with Joss Lynam, Emmett Goulding and Anthony Latham, which recorded a first Irish ascent of a significant Himalayan peak. Four years later, they joined the Irish Andean expedition, on which fellow mountaineer Tom Hand lost his life.

It was to be her last trip of that type, as she and Calvin started a family shortly afterwards. However, three small boys were soon camping with their parents below various peaks every summer.

“One of us would stay with the kids and one of us would climb,” she says, recalling those annual trips to the Alps. The couple wrote guidebooks to climbs on Fair Head and the Burren in Co Clare, and Torrans, one of just four Irish alpine/international mountain guides, participated in more expeditions to the Himalayas, including one to the world’s second highest peak, K2.

The eldest of their sons is now 30. All three “love wild and remote places” but have “no interest in rock climbing at all”.

The development of indoor climbing walls – or “climbing gyms” – and the use of fixed “bolts” on continental routes has opened up the sport for women, she says. At the same time, there are still few females involved in “traditional” mountaineering and alpinism – both of which, she says, are currently “out of fashion”.

“She is one of the most significant climbers of her generation of any gender,” a colleague says, with a distinguished career on rock and ice from the Alps to the greater ranges, yet she has never courted publicity. Early retirement after 30 years at Bray Educate Together in Co Wicklow has opened up more time for her.

She recently returned from climbing with 72-year-old Torrans in Nevada in the US, and plans to go ice climbing in the Alps in January. She doesn’t have to travel so far to her favourite location of all time. Heaven, for her, is still a day out on Fair Head. Clare Sheridan will deliver Mountaineering Ireland’s annual Lynam lecture in the Edmund Burke Theatre, TCD on Thursday, December 11th at 8pm. (Doors 7.15pm). mountaineering.ie