Why are there bibles in polling stations? 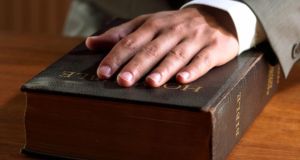 Many voters in the referendums have been struck by the presence of bibles in polling stations.

This has set many people wondering why there would be literature of any kind inside an official polling station, and even if there is some sort of bias in having a bible in the same place as where people will be voting on the contentious same-sex marriage bill.

A spokesman for the Department of the Environment said the Electoral Act provided for the swearing of an oath by voters so as to affirm their identity.

Under a long-standing practice, a bible is provided to all returning officers as part of their “pack” for elections and referendums.

The spokesman said there was no obligation on anyone to swear an oath with the bible and its presence in polling stations was not intended to cause offence.