Why are cyclists so vulnerable on the roads?

Alarming rise in cyclists killed on roads this year 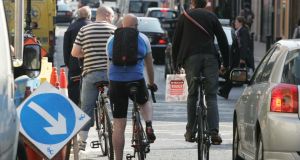 The death toll puts us on course to have the worst year for cyclist fatalities since 2008. Photograph: David Sleator

Natalia Jimenez Martinez was just a few minutes into her journey to work at a medical devices factory in Limerick at 7.20am on Wednesday, when she became the eighth pedal cyclist to die on the roads this year, after colliding with a truck.

The death toll, just over half way through the year, puts us on course to have the worst year for cyclist fatalities since 2008 when 13 died on the roads.

The number of cyclists killed so far this year surpasses or equals the annual total for last year (five cyclists), 2011, 2010 and 2009 and just one less than the total for 2012. So should we be worried about this seeming spike in fatalities and why are road users so vulnerable?

Dr Mike McKillen of advocacy group Cyclist.ie says the summer months are often the worst because more people are out on their bikes. Numbers are so small it is hard to say what the cause of the increase is. He notes the figures don’t take account of the numbers injured.

One contributing factor could be an upturn in the economy, McKillen says, which is bringing more trucks on to our roads again.

The danger caused to cyclists by trucks was highlighted by the inquest into the death of Louise Butler (26) earlier this week.

The cyclist was on her way to work when she was struck by a left-turning truck in Blackrock, Co Dublin, as they took off from a junction last August.

The forensic collision investigator told the court she may have been in a blind spot for the truck.

Like many of those killed, Butler was using her bike to get to work, travelling from her home in Ranelagh to work in Monkstown.

Commuting to work by bike is on the rise – in Dublin it has doubled in the past decade. With a growing number of cyclists on the road, how do we keep fata- lities from increasing too?

Some room for improvement appears to lie in more care and attention, and edu- cation of drivers and cyclists.

The data shows that all the cyclist deaths this year involved a collision with a car or a truck. McKillen puts much responsibility for the safety of these vulnerable road users firmly on drivers.

“They have got to learn to interact and understand that they don’t own the road; some drivers just do not accept that,” he says.

Responding to the figures, the Road Safety Authority said the focus must be twofold: more cautious cyclists on one hand and more cautious drivers on the other. It urged cyclists to ensure they were visible and drivers to anticipate cyclists at junctions and check blind spots.

“Road safety is a shared responsibility and if we’re considerate to each other, we’ll see fewer needless collisions and deaths,” it said.

Coroner Dr Brian Farrell this week noted he had dealt with many cases of cyclists going on the inside of high-sided vehicles. It was unclear what could have saved the life of cyclist Louise Butler, whose distraught parents and siblings sat in the Coroner’s Court on Thursday, reflecting the pain left behind in every cyclist’s death.