White-tailed eagle, Ingar, thought to have been poisoned 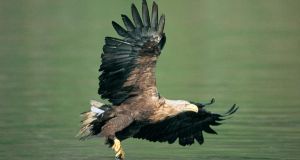 Before the current reintroduction the last pair of white-tailed eagles were recorded breeding in the wild in Co Mayo in 1912. File image

The PSNI has identified a rare bird found near Lough Erne, Co Fermanagh, last weekend as a white-tailed eagle, or Haliaeetus albicilla. The bird known as Ingar, was released in Killarney National park in 2011.

The Golden Eagle Trust which has been attempting to reintroduce the eagles to Ireland via Killarney National Park, since 2007 described the loss of Ingar as “a sad end to a beautiful bird”.

Before the current reintroduction the last pair of white-tailed eagles in Ireland were recorded breeding in the wild in Co Mayo in 1912.

A tracking device indicated Ingar, who had a wingspan of over two metres (six feet), with a body length of around 1 metre, had spent most of 2014 on the Lough Erne wetlands in the Cavan Fermanagh Border area.

Although the best chance of sighting White Tailed eagles is usually in the Killarney National Park, fledglings tend to find territories of their own.

It is thought the bird may have been dead since December.

The white-tailed eagle feeds on carrion, such as dead sheep and seals, as well as fish caught after a spectacular dive. It is thought Ingar may have been poisoned.

The species is classed as “rare” with less than 10,000 pairs breeding in Europe. Numbers of white tailed eagles have suffered large declines due to persecution and use of pesticides, and in Ireland, several re-introduced birds have been found dead due to ingestion of poisoned baits.

It is a similar bird to the golden eagle or the common buzzard and was once widespread in the west of Ireland.

It is understood that a landowner in the Newbridge Road area of Lisnaskea contacted authorities when Ingar’s remains were located.

A spokesman for the PSNI said many people may not be aware that these birds are present and are a protected species.

Birdwatch Ireland will next week launch a report on bird sensitivity to wind development with a mapping tool, in the European Parliament office, Molesworth Street.