Whale and dolphin survey to assess effect of seismic testing 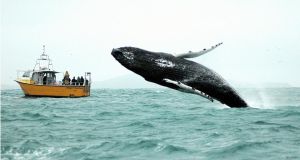 Whale and dolphin activity on Ireland’s continental shelf is being measured off the west coast this week by a 21-metre yacht known to be one of the “quietest research vessels in the world”.

RV Song of the Whale has been chartered as part of a Department of Energy project to assess whether seismic testing for oil and gas on Ireland’s Atlantic margin could interfere with marine mammals.

Noise pollution from seismic and other activity can transmit across thousands of square kilometres of ocean, causing physical injury, disorientation and death to whales and dolphins.

Irish waters were declared a whale and dolphin sanctuary 24 years ago, and cetaceans are protected under national legislation and under a number of international directives and agreements which the State has signed.

RV Song of the Whale is owned by the British-based Marine Conservation Research Organisation, and has been hired by the Marine Institute as a platform for the survey work undertaken by Galway-Mayo Institute of Technology (GMIT).

GMIT is the lead organisation in the three-year project, known as Observe-Acoustic, which involves both static and passive measuring of whale and dolphin activity.

GMIT scientist Dr Simon Berrow said Cuvier’s beaked whales were a main target group for the project, as the shelf edge was potentially a good habitat for them.

“Seismic activity has been effectively banned on the shelf edge by the National Parks and Wildlife Service (NPWS) while this information is being gathered,” Dr Berrow noted.

The Department of Arts, Heritage and the Gaeltacht, which is responsible for the NPWS, is supporting the Observe project.

The research involves a number of elements. “Static” measurements are being gathered from a series of mooring buoys deployed in four locations over canyon systems and slopes along the shelf edge.

“Passive” measurements are being gathered in a series of voyages, the second of which will take place over the next 10 days by RV Song of the Whale up to 200 miles out on a block off the northwest coast.

As Song of the Whale scientist Anna Cucknell explained, the yacht was purpose-built to conduct research under sail, which reduces noise to a minimum. The vessel’s design even reduces electrical sound.

Two tow cables deployed from its stern are fitted with hydrophone equipment, which can pick up mid to low frequency sounds made by marine mammals. It is also fitted with observation platforms.

“Robust data” gathered in the surveys will inform conservation management by assessing the importance of these shelf edge habitats for whales and dolphins, Dr Berrow said, describing it as an “excellent example of best international practice”.

Equipment on board is provided by the Sea Mammal Research Unit Ltd at Scotland’s University of St Andrew’s.

Skipper of the international crew, which includes four observers from GMIT, is Capt Rodrigo Olson from Mexico.