Wexford community gathers to mourn in wake of road tragedy 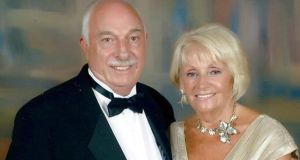 Doug and Lily Alexander, who died in the crash on the N25 near Cushinstown in Co Wexford.

The N25 crests the hill rising out of New Ross en route to Wexford town and, just at the point where it veers a little to the right, you can see the granite steeple of the pretty church of St Mary poking up through the trees of Cushinstown.

A man standing in the churchyard yesterday thought out loud.

“To travel all that way and then for this to happen,” he said, as bewildered as everyone else as to the catastrophe of the evening before.

“They were within sight of where they were going,” said a woman standing with him.

For Lily Alexander, her trip to Wexford was an important journey. Lily, her sister Winnie and their seven siblings grew up together in Limerick. But Lily went to the United States, where she lived in Oakland, just south of Chicago, with husband Doug.

Winnie, on the other hand, married Jim and lived in Wexford – down the quiet, tree-lined country road that is also home to St Mary’s.

They were separated but still close.

About 200 people filled St Mary’s for Winnie’s funeral yesterday – Wexford folk, country folk and family friends came to say goodbye to a fondly remembered octogenarian . . . and perhaps just a few were prompted to come because of what had happened the evening before on the road up on the hill overlooking the church.

Light flooded through the Victorian stained-glass windows of the 150-year-old, neatly-kept granite building.

Joanne McCabe, one of Winnie’s granddaughters, stood high in the organ loft gallery and sang as the Eucharist was readied.

May you find that long-awaited golden day today

A man returning from receiving the Host whispered to his friend: “A minor slip, minor slip.”

Four tall, slender candles marked each edge of Winnie’s coffin, which was plain, simple but beautiful. With it was a photograph showing a large family gathering.

Fr Sean Devereux spoke of Winnie’s warmth, her love of family and the “cup of tea at home”.

The sentiments were echoed by her daughter Noreen, who remembered a woman for whom family was the centre of life. Winnie was caring and loving and delighted in her grandchildren when they came along to brighten her years.

As her coffin was carried shoulder high (four men, two women) from the church, Joanne sang Be Not Afraid.

I go before you always

And I will give you rest

Winnie was probably fortunate not to have known what happened on the hill.

The night before her funeral, her wake was being held in her house down the lane past St Mary’s.

Lily and husband Doug, both 75, and two sons, Doug jnr and Steven, 52 and 49 respectively, were on their way to the wake, all the way from Illinois. At the top of the hill, just as it fell down towards Cushinstown and Winnie’s house, their destination, they pulled on to the hard shoulder and appeared to begin to make a U-turn back towards New Ross, St Mary’s steeple there in the dark before them.

The driver of the huge red-and-white articulated lorry appears completely blameless for what happened: the car appeared in front of him suddenly, and he ploughed into it with explosive force, rendering it a crumpled mass, hurtled across the road into the far verge.

“They’ll never have known what hit them,” said a man on the scene yesterday just before Winnie’s funeral down below in St Mary’s. “Instant. Instant,” he added without need to elaborate.

As they carried Winnie from the church and along the lane to the parish cemetery, wind carried the hum of diverted traffic moving along another road, a narrower road, away from the still-closed N25.

Up there on it, huge, heavy-duty removal vans, mechanics and fire-fighters struggled amid blue and yellow flashing lights to drag the articulated lorry off the muddy verge, on to the hard shoulder and fully into the road again so a low-loader could take it away.

A screen shielded the smashed car from view.

As they worked away on the hill, down below under a lead-grey sky, Winnie’s coffin was lowered into the ground beside the grave of her husband, Jim. Fr Devereux gave blessings and led prayers and, one by one, family members dropped 10 red roses into the grave.

And as they walked back along the lane, they talked about Winnie still.

“The kitchen table,” said one younger woman to her friend, “that was the heart of life for so many of them.”

And not a few thought also of the funerals yet to come and the heartbreak tearing at other families far away.