More than 1,400 free events take place all over the country

The Irish Times bring culture onto the streets and basements of Merrion Square in Dublin for Culture Night. 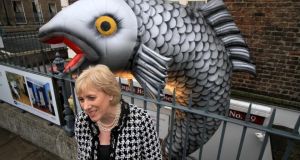 Minister for the Arts Heather Humphries at the leaping Salmon at the ESB Museum. Photograph: Nick Bradshaw 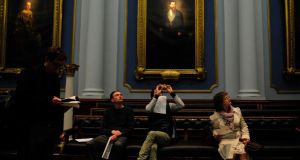 Members of the public pictured the Grand Lodge Hall in The Freemasons in Molesworth Street, which was open late for Culture Night. Photograph: Aidan Crawley 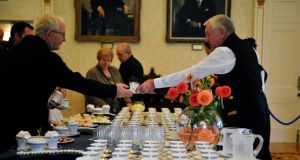 A man recieves refreshments in Aras An Uachtarain during a tour organised for Culture Night. Photograph: Aidan Crawley 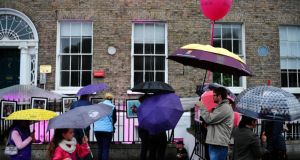 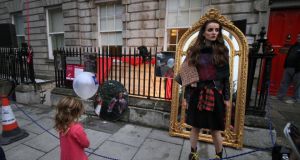 A ‘Style on the Square’ fashion show presented by 9CrowStreet and the Tweed Group. Photograph: Nick Bradshaw 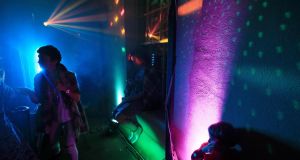 The ‘Now Way Back’ tiny rave created by the makers of the Drop Everything Festival. Photograph: Nick Bradshaw 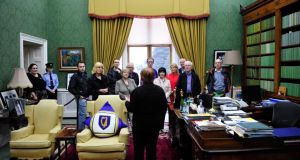 Members of the public pictured in the President’s private study in Aras An Uachtarain. Photograph: Aidan Crawley

Wet weather failed to dampen the enthusiasm for Culture Night with hundreds of thousands turning out all over the country to avail of more than 1,400 free events tonight.

Some 900 venues, including museums, galleries, cathedrals, libraries, parks, government buildings and theatres, in 36 regions, towns and cities, opened their doors in the ninth year of the cultural feast.

Dubliners had over 100 events to choose from. Annual classics proved popular, such as the opening of Leinster House. There were 40 new venues including Áras an Uachtaráin and Farmleigh in Phoenix Park and Airfield farm in Dundrum.

At Smithfield, visitors could watch films from the comfort of their cars, at the National Gallery of Ireland, people could have their photograph taken in a life-size replica of some of the gallery’s master paintings.

Even public transport took on a cultural theme, with Dublin Bus running shuttle buses on four routes to cultural venues, with musicians and storytellers on board. A team of poets from InkStorm Poetry Depot wrote bespoke poetry for passengers.

Director of the Arts Council Orlaith McBride said Culture Night was gaining strength not only in Dublin but throughout the country. The organisation hosted the event in the square to connect with people in a different way, she said. “It’s about saying this is what we do,” she said.

The programme was appreciated by over 1,000 people, including David Mahon (9) and his brother Oscar (7) from Cabra who were particularly pleased with the free food.

Among national highlights were views of Cork City from a 40ft Bantry Bay Longboat, a digital display of the National Self-Portrait Collection of Ireland in the windows of RTÉ Lyric fm in Limerick, a performance by the Barrack Street Concert Band in Waterford City and a traditional-living evening at the Bog of Allen Nature Centre in Kildare.

In Letterkenny, Co Donegal, highlights included music from jazz ensemble Errigal Groove Orchestra. In Castlebar, Co Mayo, at the National Museum of Ireland – Country Life, the 20th anniversary of Riverdance and its Mayo roots were celebrated with music, dance and conversation. In Sligo, among more than 20 events, the PassePartout Circus presented a fiery performance, Inferno.

Among 16 events in Belfast was the Big Gigantic Drum Circle by The Gathering Drum. A Chinese Dragon Dance was among more than 50 events in Derry. Events also took place at Irish cultural centres in Paris and New York.