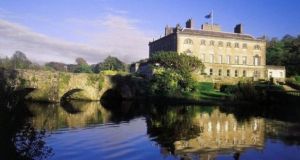 Westport House was put up for sale early last year with an asking price of €10 million and with debts of some €1 million.

The sale of 18th-century Westport House to a local business dynasty was described as a “red-letter day” as it was confirmed by Minister for Rural Affairs Michael Ring on Friday.

The transfer of the Co Mayo house and estate to Hotel Westport Ltd, a company run by the Hughes family, would see “the baton move from one local family to another”, he said.

The Hughes brothers purchased it from the Brownes, descendants of pirate queen Grace O’Malley, for a price reported at “close to” the €10 million guide. It is expected to mean that some €50 million will be invested in the house and 455 acre estate.

Cathal Hughes (64) and his brothers Harry (61) and Owen (60) run the successful Portwest outdoor clothing firm which had a turnover last year of some €125 million. The family owns the four-star Hotel Westport and two of the Hughes brothers own the Carraig Donn fashion and homeware chain .

The historic house and estate were put up for sale early last year with an asking price of €10 million and with debts of some €1 million. 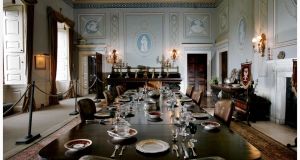 In pictures: inside Westport House

A loan of €6.5 million taken out by the late Lord Altamont of the Browne family in 2006 for further development amounted to over €9 million when acquired by the National Asset Management Agency (Nama).

Mr Ring, who is based in Westport, was instrumental in ensuring the loan was withdrawn from a portfolio sold by Nama to a US investment company in 2015. He explained at the time that his intervention was in the public interest.

Mayo County Council then became involved in protracted discussions with Nama to acquire the loan as part of a deal ensuring the house could become available to a “benevolent investor” who would ensure it remained open to the public.

A study published by Mayo County Council estimates its economic benefit to the region was €51 million.

Mr Ring described the transaction as a “long and at times, difficult journey”. He said the town’s fortunes are “inextricably linked” to the house.

“ It is the ideal outcome, not alone to have a respected and successful local family business to acquire Westport House but also to commit to its future”.

Reputed to be built on the foundations of a castle owned by Grace O’Malley (Granuaile), the original Westport House was built in 1679 by Colonel John Browne . The main house as it now stands was designed 50 years later by Richard Cassels, who also designed Leinster House. It was opened to the public in 1961.