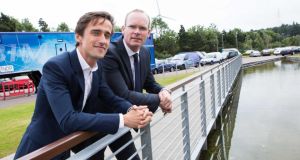 Pierre Cousteau, director of Cousteau Foundation and son of Jacques Cousteau with Simon Coveney TD Minister for the Marine at the Harnessing our Ocean Wealth conference in Cork Harbour. Photograph: Darragh Kane

French explorer, film-maker and diver Jacques-Yves Cousteau once said that “if the sea dies, man dies”, and his youngest son concurs.

Cousteau, who was a guest speaker at the State’s Harnessing our Ocean Wealth conference in Ringaskiddy, Cork, on Friday, believes the “tree hugging” approach of his parents’ generation was of limited success.

However, a growing recognition that environmental damage is having an adverse effect on living standards means that there is a “convergence” between consumer values and global stewardship, he says.

Cousteau, who was taught to scuba dive by his father at the age of nine, holds an MBA and runs a citizen science network known as Cousteau Divers. He is also a goodwill ambassador for the International Union for the Conservation of Nature (IUCN).

He is currently working on commercialising a turbo sail which is a “hybrid wind propulsion device” for shipping .

A “Sea for Society” project with which he is involved commissioned research from NUI Galway, and found that “attitudes and awareness, governance and strategy and knowledge” or lack of it, presented the three main barriers to protecting the marine environment.

Ireland was “not alone” in suffering from a “sea blindness”, he said. “Ocean literacy” and an acceptance that we are “part of nature” and not “distinct from it” were vital element s in accepting the impact that man has on the oceans, he said.

Cousteau said his father was “pessimistic about the future when he used his mind”, but “optimistic when he relying on his heart to trust human ingenuity”. He is due to speak about his own career as a diver at the conference’s free “Seafest” event in Ringaskiddy on Saturday.

Ocean governance is the focus of a new international consultation which the EU has initiated, European Commissioner for Environment, Maritime Affairs and Fisheries Karmenu Vella told the conference.

With increasing pressure on a land-based economy, “whether we like it or not, we have to turn to our oceans for solutions”, he said.

Ireland, which has 17 per cent of Europe’s waters, has “been to the forefront when it comes to promoting ocean governance”, Commissioner Vella said.

He paid tribute to Ireland for “grasping the potential of its maritime economy”, and noted that it was growing nearly twice as fast as the overall economy.

Commissioner Vella said that the EU wanted to develop fish farming but not at “the expense of the environment”.

Projects which were “not sustainable enough” would “not get a single euro” from the European Maritime Fisheries Fund, he said.

Ireland is going to be part of a “blue century”, Minister for Marine Simon Coveney forecast.

The days of not prioritising the marine sector are “over”, Mr Coveney said.

The maritime economy has grown by 9 per cent between 2010 and 2012 and by more than 8 per cent for 2012 to 2014, with a turnover of about €4.5 billion a year, he said, and new opportunities were emerging in “high tech” marine products and services, marine biotechnology and commerce.

Ireland will have a maritime spatial plan by 2021 which will be spearheaded by the Department of the Environment, the conference heard.

The patrol ship with 55 crew and two Army medical staff set sail from Cork harbour under the command of Lieut Cdr Daniel Wall.

It is replacing the LÉ Eithne, which rescued almost 3,400 people of 21 nationalities in waters between Libya and Sicily. It will assist the Italian authorities until September, Mr Coveney said – “dependent on the operational demands and requirements arising.”

Taoiseach Enda Kenny is due to open the €15 million Beaufort research laboratory in Ringaskiddy on Saturday. The free “Seafest” programme includes a food village, sailing and open water swimming, tours of Naval Service ships, rescue displays and demonstrations including a “hurricane simulator”.