‘We’ll all be in tomorrow’: Bus drivers collect Euromillions cheque 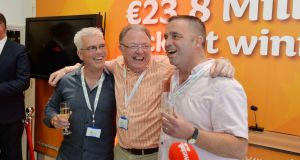 David Doherty, John Brady and Craig Shearer of the Dublin Bus Euromillions winning syndicate. Mr Shearer (right) says he is out of the danger zone after being diagnosed with cancer in 2014. Photograph: Alan Betson/The Irish Times 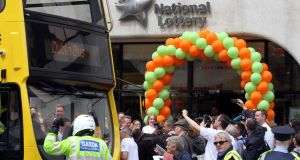 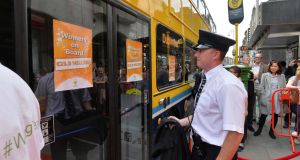 The 22 members of the Dublin Bus Euromillions winning syndicate from the Broadstone depot and members of their families arriving at the National Lottery headquarters to receive their winnings of €23.8m. Photograph: Alan Betson/The Irish Times 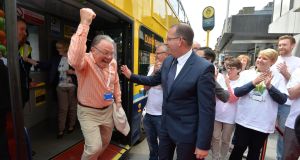 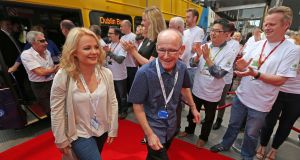 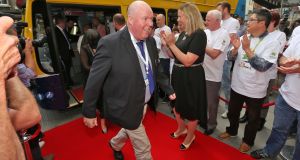 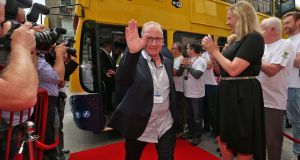 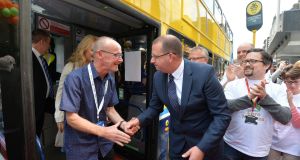 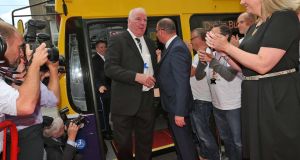 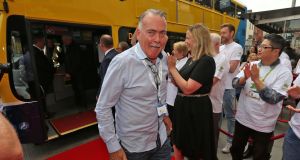 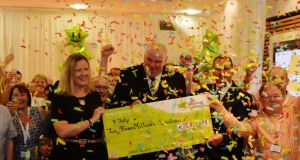 Ireland’s newest millionaires stayed close to their roots upon arriving today at the National Lottery headquarters to collect their almost €24 million jackpot cheque - in a Dublin Bus.

The syndicate of 22 smiling Dublin Bus staff from the Broadstone depot in north Dublin were clearly elated with their EuroMillions jackpot as they stepped off the bus - which read “Winners on board” on the doors and windows - and onto the red carpet.

The group was greeted with cheers and clapping by members of the public who had gathered on Abbey Street. The winners waved, jumped and hugged each other with excitement.

An overjoyed Craig Shearer (51), who has been a Dublin Bus driver for 32 years, said all the winners would continue to work.

“Although that could change on an icy cold December morning,” he laughed.

Mr Shearer, who lives in Finglas, Co Dublin, and is originally from London, said he was in shock when he was told he had become a millionaire with all his workmates.

“One of my colleagues rang me and said, ‘Are you sitting down?’ - and of course I didn’t believe him at first. I had a copy of the numbers from years ago at home and my wife checked them for me,” he said.

“But today is the first time the penny’s dropped. As soon as we got off that bus and everybody was waving it suddenly hit me - this is real, this is real.”

Mr Shearer, who has three children, said the jackpot win was the second time he had won the lotto after he was diagnosed with leukaemia two years ago.

“Cancer was tough. It put things into perspective and context. I’m out of the danger zone now and in the maintenance phase. I’m very grateful. This is a second win for me,” he said.

Mr Shearer said he wanted to thank Dr Michael Fay and all the medical staff who treated him at the Mater Hospital.

“I was out sick for two years, and Michael saved me and I want to say thanks to him and all of his team. I wouldn’t be here without them,” he said.

Mr Shearer said he would have loved it if his father, who died just two months ago, could have been present to celebrate his good fortune.

“It’s been surreal. It’s been a strange couple of years and this is definitely one of the strangest parts,” he said.

“I love travelling. I haven’t been able to do as much as I wanted to, but that’s different now.

“I’m going to take a couple of weeks and think what to do. We’re all the same. There could be some nice new cars around next week.”

Mr Shearer joined two other ecstatic bus drivers who spoke to the media about their win in enjoying a glass of champagne.

David Doherty (51), said the decision to speak about the win was easy as all their neighbours and customers had already figured out their big win.

“We’re just over the moon. I’ve two lovely daughters and a lovely family. I’m getting this cheque into the bank as soon as I can and see what I’ll do then,” he said.

Mr Doherty said he was cycling along the canal with his wife last Saturday when he got a call from a colleague to tell him the good news.

“I thought it was a joke. I rang up another couple of the lads and they weren’t sure. I rang the garage and the inspector said, ‘No they’re all jumping around up here so you’re after winning the EuroMillions, you’re a millionaire’,” he said.

“I just couldn’t hold it in, I started jumping around. It was great.”

Mr Doherty said he had moved to Finglas 28 years ago, and loved the area and his neighbours so he would not be moving home.

Fellow winner John Brady, who has been a bus driver for 43 years and has four children, said the syndicate had been going for 17 years and the group had never taken money from the kitty before now.

“This is our first money we took for the syndicate. At Christmas time we’d have it in pool and if there was one of the lads out sick or bereavement in the family we’d make a collection among ourselves and put whatever in the kitty towards it,” he said.

Mr Brady (63), who is from near Knock in Co Mayo and lives in west Dublin, said the syndicate group had been known as the “Eurodrivers” after the buses bought by the Government in 2008.

“I always had a dream that I would win the lotto. I dreamt but I never thought it would really happen. There’ll be a nice party in the west of Ireland in the near future,” he said.

“We’ll all be in work tomorrow though. When I retire I’d love a trip to Nashville.”