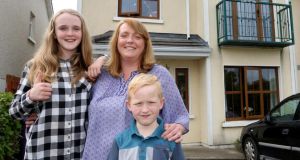 Anna Flynn with her children Isobel and Tommy at their home in Meadowgate, Gorey, Co Wexford. Photograph: Mary Browne

In the summer of 2007, Anna Flynn was getting her life back on track after her marriage had broken down. The divorce had been finalised and the family home sold.

When she bought the Gorey house she was comfortably able to afford the €1,300 mortgage. But the crash not only saw her home’s value tumble, it quickly cost her her job.

Without work she could no longer afford the full repayments. Her lender, Irish Nationwide, was understanding. Payments were first suspended and then made interest-only.

For a year, a social welfare supplement allowed her to cover the costs. Then that stopped and things got a whole lot worse. By then, her loan had been transferred to the Irish Bank Resolution Corporation.

The tone of the letters became more stern: “I was trying to pay as much as I could but with four children – one in college, one doing their Leaving, one in primary school and a baby – it was hard.”

The stress saw Flynn hospitalised twice. She contemplated taking her own life. Twice she overdosed on pills and was brought back from the brink.

Then things, if possible, worsened. IBRC sold her loan to a vulture fund. “I was given no real notice that it was being sold and I was certainly given no chance to buy it at anything close to the same rate the fund had paid,” she says.

“Once I was with the vulture fund they did not want to know. Basically they were saying repeatedly, ‘We don’t care, we just want the arrears to be paid off in full or we want the house’.”

Flynn became seriously ill and was hospitalised for weeks after surgery. “I was completely adrift and they were absolutely impossible to deal with. I couldn’t seem to get anyone to talk to me or to help me. Then I was served with eviction papers. I would never be the type of person to expect something for nothing and I would hate people to think of me as a victim.

“On an individual level the staff were polite and courteous, but the message was always the same: ‘We are going to take the house and you are going to have to get out’.”

Flynn tried different options, without success. Eventually she met David Hall of the Irish Mortgage Holders Association. He argued that she was perfect for a scheme where one-time mortgage-holders become tenants.

There was no joy. However, Hall went to the press to tell the story. A year ago, the fund agreed to let Flynn move onto the scheme. “We have been working through the details ever since,” she says.

“Once they said yes I felt as if I could tackle everything. I know I will never own my own house but I will be able to keep a roof over my kids’ heads. That is the only thing that really matters. I have even started planting flowers in the garden because I know I will be here for the long term. And that is a lovely feeling.”