Waterford residents told not to take law into their own hands 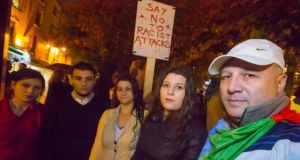 Civic leaders in Waterford have joined with An Garda Síochána to urge people not to take the law into their own hands following incidents last weekend when crowds targeted a number of Roma families in a protest against criminality.

Mayor of Waterford city and county, James Tobin and mayor of metropolitian district, Lola O’Sullivan joined Oirachtas members, city management and senior gardaí and in issuing a statement condemning what happened in the city last weekend.

Almost 200 people gathered at Manor Street in the city last Saturday evening outside the home of a large Roma family – including toddlers and children – and staged a protest in which windows were smashed and doors broken down.

Some Roma families had to be evacuated from their homes during the protest and the following night a smaller group also protested and kicked at the doors of a building they believed housed members of the Roma community.

“There can be no tolerance for people who take the law into their own hands or target any group who they allege are involved in wrongdoing. Aside from the risk of harm being done and crimes being committed, there is also a real danger of prejudicing future prosecutions.

“Gardaí must continue to be supported by all to do their work in policing Waterford fairly, effectively and transparently. Without fear or favour, they will continue to work hard at preventing and investigating all types of crime, including racial discrimination.”

Describing Waterford as “a safe and welcoming city”, they said it has the lowest rate of recorded crime of any comparably-sized urban centre in the country. and does not have a particularly widespread problem of street crime and anti-social behaviour.

“All reported crimes are fully investigated, with a detection rate in Waterford of 75 per cent for violent crime – well ahead of the national average,” said the group in a joint communique issued this lunch hour

“An Garda Síochána work with communities to protect the quality-of-life in Waterford with the prevention and detection of crime and anti-social behaviour among their core functions. They continually prosecute offenders in court where convictions may result in custodial sentences

“This is especially disappointing as economic recovery begins to take hold locally and Waterford is promoted with growing success as a destination for investors and visitors alike.”