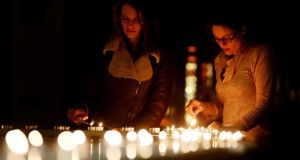 People at a prayer vigil held for Tom O’Gorman, who was found dead at his home in Castleknock, is held at St Teresa’s, Clarendon St, Dublin. Photograph: Brian Lawless/PA Wire

Friends and colleagues of killed researcher Tom O’Gorman have gathered to pray at a church he frequently used. The vigil, organised with the support of the Iona Institute where the 34-year-old had been working for several years, was held at St Teresa’s on Clarendon Street in the heart of Dublin city centre.

The hour-long service was arranged as friends and people who worked with Mr O’Gorman — during his time as a journalist with Catholic publication The Voice Today and latterly as a researcher — struggled to come to terms with his death.

He was found dead at his home in Castleknock, Dublin, in the early hours of Sunday. A lodger who had been living in the house, Saverio Bellante, aged 34 and originally from Palermo in Sicily, was yesterday remanded in custody charged with his murder. It is understood the two men had been playing chess before the killing. In a brief statement announcing the prayer vigil, the Iona Institute, a think-tank promoting Catholic values, said the circumstances of Mr O’Gorman’s death defy description.

“We are all still processing and trying to absorb the death of Tom and the enormity of what happened to him,” the group said. Funeral arrangements have not been released.