The race to succeed Enda Kenny has begun but how does the voting system work? 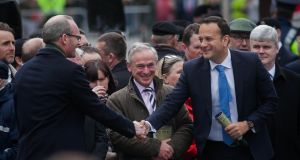 Leo Varadkar has a commanding lead in the Fine Gael leadership race after securing backing form twice as many of the party’s TDs and Senators as Simon Coveney. Photograph: Collins

Minister for Social Protection Leo Varadkar has opened up a commanding early lead in the Fine Gael leadership race after securing the support of twice as many of the party’s TDs and Senators as his main rival, Simon Coveney.

FG leadership tracker: track the contest and check who your local TD, Senator, MEP and councillor is supporting.

But the Minister for Housing is hoping a substantial number of the 24 parliamentary party members who have yet to publicly support either candidate will help him close the gap on his rival.

His supporters hope to narrow Mr Varadkar’s lead, or pull ahead of him, before the series of hustings that will take place next week and will mark the engagement between the candidates and rank and file members. Under Fine Gael rules, the parliamentary party commands 65 per cent of the votes, with councillors getting 10 per cent and the 21,000 members 25 per cent.

Both camps in the contest to succeed Enda Kenny have acknowledged that there are 15 to 20 TDs, Senators and MEPs whose support is up for grabs.

In another significant development that further signalled generational change within Fine Gael, Minister for Finance Michael Noonan announced he would not seek a place in the next cabinet and would not stand at the next election, having first been returned as a TD for Limerick in 1981.

Mr Varadkar sought to set a strong early pace by organising a large number of declarations for his candidacy, although he has yet to speak publicly in the campaign.

It is expected that Minister for Public Expenditure Paschal Donohoe will also support Mr Varadkar today, although this has been anticipated for some time.

Mr Coveney’s supporters are drawing on the experience of the failed 2010 heave against Enda Kenny, when the Taoiseach overturned initial momentum for his then opponent, Richard Bruton.

Under the electoral college system of weighted votes, Mr Varadkar has secured 31 per cent of potentially available support, with Mr Coveney on 17 per cent.

The focus will now turn to a number of Ministers who have yet to outline who they will support. These include Tánaiste Frances Fitzgerald, Minister for Foreign Affairs Charlie Flanagan, and Minister for Agriculture Michael Creed.

Ms Fitzgerald decided against standing for the leadership, as did Minister for Education Richard Bruton, who immediately said he would be supporting Mr Varadkar.