Use of illegal migrants on Irish trawlers a ‘national disgrace’ 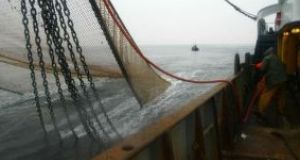 The use of illegal African and Asian migrant workers as cheap labour on board some Irish trawlers is a “national disgrace” and a blind eye has been turned to the practice for years, according to Ken Fleming of the International Transport Workers’ Federation (ITF).

The use of illegal African and Asian migrant workers as cheap labour on board some Irish trawlers is a “national disgrace” and a blind eye has been turned to the practice for years, according to Ken Fleming of the International Transport Workers’ Federation (ITF).

Mr Fleming was responding to the claims made in the Guardian newspaper on Monday, following a year-long investigation which rocked the fishing industry .

He said “90 per cent of fishing vessels are involved” in the practice and that he had been trying to raise awareness of it for almost 10 years.

“I produced a report in 2008 and 2010 and sent it to every Government minister who would read it, basically a report saying this practice was happening and it named the boat owners and nothing was done,” he told The Irish Times.

He cautioned against any rash decisions in the wake of The Guardian’s revelations, saying the Government needed to get all stakeholders – boat owners, the Federation of Irish Fishermen, the ITF and the Government itself – around the table to clean up the industry.

“The State has an obligation now. If there’s any rash decisions at this stage they’ll be the wrong ones. You have a situation now where we know it’s going on, it’s going on for years. Anyone can see these guys on the boats. It’s that simple.

“Rounding people up and driving them to Dublin airport will not solve this because they’ll simply be replaced,” he said.

There should be a deadline of three months placed on talks between stakeholders, he said.

“And at that particular stage all the guys in the industry will know if this doesn’t work out it means they will have to go home. I’d prefer to see everybody in the industry live out the duration of their contracts and be paid the Irish minimum wage and then when it’s over, if the State decides they can’t facilitate them in the workforce, well then it is inevitable what has to happen,” he said.

Mr Fleming said the Government had two choices: to implement a work permit system or decide not to and monitoring would be needed if a permit system was introduced to ensure people were being treated correctly.

He said if permits were not issued, measures should be taken to get crews home safely and steps taken to choke off the supply of labour.

Minister for the Marine Simon Coveney he was “very concerned” about allegations made by the Guardian about the treatment of workers on board Irish fishing vessels, particularly in relation to their safety.

He said he did not accept the Government had been turning a blind eye to the practice saying the gardaí had established a project “specifically to address concerns in relation to potential human trafficking in the maritime sector, including fishing”.

Minister for Public Expenditure and Reform Brendan Howlin described people trafficking as one of most egregious crimes of our time.

Speaking on his way into the Cabinet meeting on Tuesday, Mr Howlin said he was sure Minister for Marine Simon Coveney and Minister for Justice Frances Fitzgerald would report to Government on the matter today.

Siptu called on Mr Coveney to introduce employment protection legislation, proper training and rigorous inspection processes for migrant workers employed in the fishing industry, saying the revelations came as no surprise to those working in the sector.

Divisional organiser Gerry McCormack said the union was seeking an immediate meeting with the Minister to agree the best way forward.

“All stakeholders within the fishing industry need to participate in this process. However, the Minister should impose as short a timeframe as possible for the completion of this process,” he said.

“The work of the ITF and in particular its co-ordinator for Britain and Ireland, Ken Fleming, in bringing this abuse of vulnerable workers to public attention must be commended. We are also calling on the Government to ensure that the innocent workers caught up in this abuse are treated fairly by the Irish State and that their proper legal entitlements are provided as quickly as possible.”

Gráinne O’Toole, workplace rights co-ordinator with the Migrant Rights Centre said she was not surprised by the revelations.

“We see the gross exploitation of migrant workers in an number of different areas of the economy, in domestic work and care and the fishing industry is hugely problematic,” she told RTÉ radio.

She said the centre was dealing with a number of cases of potential human trafficking in the fishing industry and that they had also met quite a number of undocumented fishermen who have been exploited.

“What our fear now is that there’ll be a clampdown so that gardaí, the immigration section and the labour inspectorate will search boats and it’ll be the workers who end up penalised because they’re undocumented in the country,” she said.

Irish industry representatives have also said they “do not condone” any abuse of fishermen of any nationality, and have called on the Government to introduce a “long-awaited” regulated work permit system for the sector.

Irish Fish Producers’ Organisation (IFPO) chief executive Francis O’Donnell said his organisation “did not condone any ill-treatment or abuse of crew”, and called on the Government to regulate the sector to allow foreign nationals to be employed legally on board vessels.