Up to 100 Irish people in Nepal region hit by earthquake 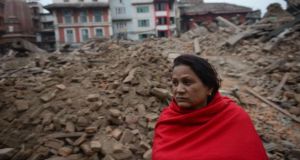 A Nepalese resident sits near buildings in Kathmandu that were severely damaged by the earthquake which occurred on Saturday morning. Photograph: Prakash Mathema/AFP/Getty Images. 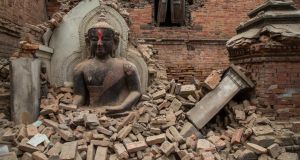 A Buddha statue is surrounded by debris from a collapsed temple in the UNESCO world heritage site of Bhaktapur in Nepal. Photograph: Omar Havana/Getty Images. 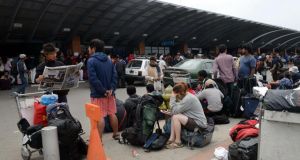 Travellers wait outside the departure hall of the airport in Kathmandu on April 26th as they wait to leave the Nepalese capital following a 7.9 earthquake which struck the Himalayan nation on Saturday. Photograph: Prakash Mathema/AFP/Getty Images.

Up to 100 Irish citizens are now tought to be in the region of Nepal left devastated by an earthquake, the Department of Foreign Affairs said.

An emergency consular response team had been set up and is working with Embassy officials in New Delhi to provide help. The department had earlier on Sunday said it had been made aware of 50 Irish people who were in the region.

Minister for Foreign Affairs Charlie Flanagan said contact had been established with many of the Irish people in the region, where at least 2,200 people were killed by the 7.8 magnitude earthquake which struck on Saturday.

“Communications lines have been affected, so this is an ongoing process that may take some time,” the Minister said.

“We will continue to provide consular advice and assistance over the coming days as the situation evolves.”

One Irish group of 11 people from Co Wexford who this week travelled to Kathmandu ahead of a visit to the base camp of Mount Everest have been accounted for after the earthquake.

Friends and family of some of the group members told The Irish Times they were all safe but were shocked by what had transpired since they arrived in the city on Friday.

They are examining the options open to them to leave the affected area.

The quake, the worst to hit Nepal in some 80 years, was followed by a series of aftershocks, the biggest of which had a magnitude of 6.7 and also hit the capital, Kathmandu, on Sunday.

Mr Flanagan said Irish Embassy officials “are continuing to work actively with EU and other international partners in the region with a view to providing practical assistance for our citizens”.

He said his thoughts “are with all those affected by the earthquake in Nepal, and in particular with the loved ones of those who have lost their lives in this tragic event”.

The Embassy of Ireland in New Delhi, which is accredited to Nepal, is liaising with actors on the ground, including EU member states and other international partners in Nepal, the department said.

Anyone concerned about friends or family in the region can contact the department on (01) 4780822.

Oxfam Ireland has launched an emergency appeal and has a team of technical experts preparing to travel to Nepal with supplies of clean water and emergency food with a view to assisting in the construction of emergency shelter and sanitation.

“The scene is one of utter devastation, according to colleagues on the ground,” said Oxfam Ireland chief executive Jim Clarken.

“It’s now a race against time to save lives and to get help to the communities overwhelmed by tragedy on a massive scale.”

The Irish charity Goal said it had dispatched an emergency response team to Nepal to support the relief effort.

“Recovery teams are continuing to search desperately for survivors trapped in the rubble, a task that has been compounded by the fact that the entire city is without electricity,” Goal chief executive Barry Andrews said.

“We have also received reports that a large number of villages on the outskirts of the capital have been completely flattened. Unfortunately, we are expecting the numbers of dead and injured to rise significantly in the coming hours.”