Union says some staff earning €5,000 a year and many on insecure contracts 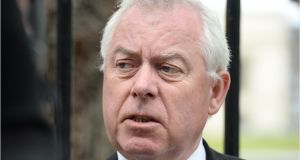 General secretary of the Irish Federation of University Teachers Mike Jennings said funding in the sector had been decimated over recent years. Photograph: Dara Mac Dónaill

University teachers may have to close third-level colleges in the short term through strikes to ensure they survive in the longer terms, their trade union has stated.

The general secretary of the Irish Federation of University Teachers (IFUT) Mike Jennings said funding in the sector had been decimated over recent years while resources, staff and students were stretched to an unprecedented extent.

He said some staff were expected to cope on salaries of € 5,000 per year for casual work while many hundreds of lecturers and researchers subsisted on insecure, short-term contracts.

Mr Jennings told the union’s annual conference that colleges were fast running out of economies and alternative strategies to compensate from funding cuts.

He said higher education was increasingly expected to survive behind a “lace curtain” of hidden poverty while the Government and Department of Education promoted the illusion that all was well in the sector.

“As a consequence IFUT may have to swap lace curtains for placards, embark on strike action and close colleges in the short-term to ensure that they survive in the long-term.”

“In the best tradition of a ‘lace curtain’ mentality, we are being forced to substitute margarine for butter, watering the milk, darning the socks and skipping meals.”

Mr Jennings said that since 2007 higher education had seen its funding from public sources by over €200 million.

He said while funding had declined, student numbers had soared. He said figurs drawn up by the Higher EducationAuthority indicated that the numbers increased by 31,000 in the period from 2008 to 2013 and were continuing to increase.

Mr Jennings maintained that in the same period staff numbers reduced by 4,500 and the student staff ratio went from 1:18.8 to 1:24.

“Both figures continue to show decline since”, he said.

He said that recent research carried out in TCD maintained that that higher education supported 150,000 jobs in the Republic of Ireland.

“It found that each € 1 spent in higher education generates € 4 for the Irish economy.”

IFUT president Michael Delargey told the conference that the incoming Government “must address the crisis in research and among researchers in third-level colleges”.

He told the conference that the vast majority of researchers were employed on “exploitative temporary contracts”, that they had been continuously been excluded from national pay agreements and that universities operated a training element to a research career to escape the obligations of the Fixed Time Workers Act.

“Many researchers teach, supervise, apply for funding, do academic administration, mark examinations, publish and carry out research yet they are denied access to appropriate academic pay scales.”

1 Coronavirus: What we know so far about how Ireland is affected
2 Coronavirus: Ireland plans for massive increase in tests
3 Irish Rail may have to suspend Sligo line services due to floods
4 Garda Commissioner ‘stands over’ IRA-Sinn Féin remarks
5 Mass gatherings due to go ahead in Ireland amid coronavirus outbreak
Real news has value SUBSCRIBE