University remembers Karen Buckley whose aim was ‘to help people’ 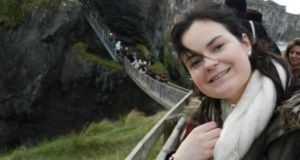 The university where tragic Karen Buckley began her nursing studies is remembering a popular graduate whose “main aim in life was to help people”.

The university where tragic Karen Buckley began her nursing studies is remembering a popular graduate whose “main aim in life was to help people”.

A candle and photograph of the 24-year-old rests on a table in the reception area of the Health Science Building at the University of Limerick from where the 24-year-graduated with a degree in General Nursing in January 2014.

A mass will take place this lunchtime in the UL Contemplative to pray for the Cork woman remembered by former teaching staff as a “bright engaging student” and the perfect candidate for a career nursing.

“I knew Karen over the four years she was here. She was an excellent student, she had such an open and bubbly personality and was very popular and because of that she made lots of friends,” said Anne Fahy, course director for the BSc in Nursing Programme at UL.

“She had a very kind heart and her whole aim in life was to help people, which is very evident from all the support that we are getting from people in the past few days and the acknowledgement from around the world.

During her four years in Limerick Karen spent a large portion of her time working with the local health service including University Hospital Limerick and St John’s Hospital in Ennis.

“She was a beautiful girl in the sense that she was very open and extremely obliging and helpful. All of the health service partners would have had great praise /[for Karen/] and we have had lots of contact from them over the last few days in support and expressing concern about her,” added Ms Fahy.

Dr Pauline O’Reilly, Head of The Nursing and Midwifery Department, at the University of Limerick said the entire college community is shocked and saddened by the tragic news.

“When you start a career in nursing you meet friends and those friends are friends for life, so our thoughts are with her friends and her colleagues,” said Dr O’Reilly.

“I would have taught Karen myself and she would have been a very bright and a very engaging girl. Many of our students go on to do Masters in Midwifery or Occupational Health and that was the path that Karen did take after working for a number of months as a general nurse.”

“The feeling on campus and on social media has been very sombre all week. It’s just shocking and hard to take in,” he said.

Mr Bolger said the students in Karen class have stared a fund-raising to support the Buckley family.

“As far as support in UL I would urge any students that affected by this tragedy to to avail of the services through the Welfare Office, through the Chaplaincy Service and through UL Counselling Department, not just this week but over the coming months too. This is obviously going to be a very hard thing to get over.”

Second year physiotherapy student at UL Denyse O’Brien (30) grew up in Mourneabbey and is a family friend of the Buckley family in particular Karen’s brother Kieran whom she has been in contact with this week.

“They are just quiet hardworking people, working the farm. All of the children worked hard, were well educated and very polite. They are the people you see at mass at Christmas. They show up at funerals and the stations, they are just regular people.”

Ms O’Brien remembers Karen from her childhood as a “quiet shy girl”, who came from a loving farming family who adored their only daughter.

“She came from the most loving of farms. She is the only daughter they love her dearly and if it’s to be that it all ended up on a farm, I just think there’s something particularly sad about that,” she said.

Ms O’Brien travelled home to Mourneabbey last night to attend a special vigil for Karen who was studying for her Masters in Occupational Therapy in Glasgow.

“I am removed from the community a certain amount because my life is in Limerick now, but to have been in Mourneabbey last night and seen everybody come together and especially the elderly people. ...If the power of prayer could have done anything it would have had good news,” she said.

Ms O’Brien praised the work of the Scottish police whom she said treated Karen “like she was the most important person in the world which is how the family would have wanted it treated”.