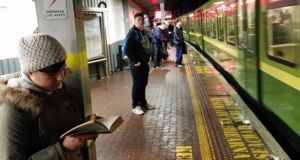 About 40,000 passengers had their travel plans disrupted on Friday by a three-hour strike by train drivers; another similar stoppage is planned for Friday, November 6th. Photograph: Frank Miller

Trade unions have warned further strike action on the railways is inevitable unless there is a change in approach by management at Iarnród Éireann.

About 40,000 passengers had their travel plans disrupted on Friday by a three-hour strike by train drivers who are members of the National Bus and Rail Union (NBRU) and Siptu. Another similar stoppage is planned for Friday, November 6th.

However, a joint Siptu/NBRU committee is also likely to meet to consider further industrial action to take place in the event of the dispute over union demands for payment for drivers’ past productivity not being resolved.

Talks aimed at resolving the row broke down late on Thursday night at the Workplace Relations Commission.

Siptu called on management at the State-owned rail company to “engage constructively with unions on commitments on past productivity it entered into in previous agreements with workers”.

Siptu organiser Paul Cullen said: “It is unfortunate that train drivers were left with no option but to undertake industrial action due to the failure of the company to engage in genuine negotiations on its previous commitment to workers in relation to past productivity.

“However, a similar approach was not evident on the management side. During the talks management representatives released information directly from discussion documents as well as wilfully misleading statements about the impact of scheduled industrial action. The confrontational attitude adopted by management during these talks is part of a wider deterioration in its approach to industrial relations over recent months.”

Siptu said a threat by management to offset costs incurred from the work stoppage yesterday from any proposal it intended to present aimed at concluding this dispute “is not constructive to finding an overall settlement”.

“Unless there is a real change in its approach, in particular a willingness to address past productivity in line with the agreement it entered into with trade unions in September 2014, further industrial action is inevitable,” he said. The company said unions had rejected proposals which would have delivered increases in earnings of close to 8 percent between February next and January 2018.