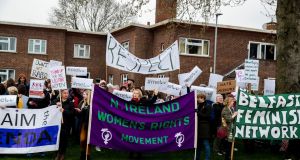 Belfast Feminist Network activists hold a protest outside Kingspan Stadium in east Belfast last week ahead of Ulster’s Pro14 match against the Ospreys, to call on Ulster Rugby and IRFU for action against what they claim is a misogynistic culture in rugby. File photograph: Liam McBurney/PA Wire

Ulster Rugby chiefs have agreed to meet with representatives of Northern Ireland’s Women’s Aid Federation in the aftermath of the rugby rape trial and its ongoing fallout.

Jan Melia, chair of the group, which campaigns against domestic and sexual violence, welcomed the move as a sign of a “willingness to change”.

Women’s Aid, along with Victims Support NI and other groups, took out a full-page advert in the Belfast Telegraph this week demanding an immediate independent review of how the criminal justice system deals with serious sexual offences.

Ms Melia said the aim of the meeting would be to “support and change the culture” and ensure the organisations’ ethos is upheld.

“It signals a willingness to change. The IRFU and Ulster Rugby need to make a good solid start in dealing with this.”

Meanwhile, the prospect of a protest at Saturday’s Ulster Rugby game against Glasgow Warriors could not be ruled out.

A handful of fans angry over the effective sacking of players Paddy Jackson and Stuart Olding are believed to be threatening to stage a demonstration.

But if they do so they may fall foul of the Ulster Rugby Supporters Club, which earlier this week decided against any protest following a survey of members.

But Mr Jackson and Mr Olding’s contracts were revoked following an internal review which examined a series of sexually explicit messages the players and their friends shared about the events of that night.

More than 40 per cent of the 900-plus members responded to the online survey, and a third of those were in favour of a protest or a boycott of Saturday’s crucial game.

Behind the scenes, however, attempts were being made to prevent any protest in deference to senior player Tommy Bowes, who plays his final match on Saturday.

But there were fears some fans may still go ahead with an impromptu display of outrage at the decision not to renew the contracts of Mr Jackson (26) and Mr Olding (25).

Forensic exam to be carried out to establish cause of fire at former Cork convent 09:17
Legislation paves way for pay deal for consultants, public health doctors 08:32
Three men due in court over west Dublin shooting 08:17
Galway church visited by Columbus and used as stables by Cromwell’s troops celebrates 700 years 07:57
NPHET officials to join Donnelly at Oireachtas Covid-19 comittee 07:55