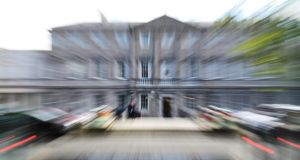 Senators are in a position to focus on the task of being national legislators unlike TDs competing in multi-seat constituencies who spend inordinate amounts of time on constituency work, law lecturer Dr Conor O’Mahony told a debate on abolishing the Seanad last night.

Opposing abolition, Dr O’Mahony, a lecturer in constitutional law at UCC, said that although Seanad debates did not always make the news, the fact is that over the past two years, senators had made more than 500 amendments to laws before they were enacted.

Dr O’Mahony said that while critics may argue the Seanad had little real power and all the important decisions were made in the Dáil, he believed that there was an inherent value in the debate itself even where no amendments are ultimately made.

“The passage of the Protection of Life during Pregnancy Bill illustrates this point,” he said. “Given how little debate occurs in the Dáil, where the vast majority of Bills are guillotined, we need all the debate we can get in our legislature.”

Proposing abolition at the debate, hosted by the Constitution Project @UCC, Dr Eoin O’Malley, lecturer in government at DCU, said he believed the referendum would not make much difference to Irish political life.

“We have a weak Seanad that does very little. Abolishing it won’t have a great impact one way or another,” he said. “The Seanad has very limited powers and has spent 75 years studiously avoiding using that little bit it has.”

Dr O’Malley said it should be remembered that the Seanad never stood up to the government and only blocked the 1963 Pawnbrokers Bill because some senators got “lost” – for which people should read “drunk”.

“Contrast this to the real power of the Dáil to bring down governments – something that it did as recently as 2011, “ he said.

Those oppposing abolition won the vote by a margin of three to one.

‘A lucky escape’: Coast Guard rescues woman stuck in sinkhole in sea for 90 minutes 07:29
Locals rally to help after GP’s surgery destroyed in fire ahead of vaccine arrival 01:00
Covid-19: Ireland could be ‘close to normal’ by end of year, says Dr Ronan Glynn 01:00
Calls for ‘robust action’ over offensive social media posts by prison staff 01:00
Plan to end direct provision by 2024 would see asylum seekers housed in State accommodation 01:00