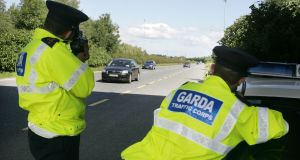 Just 13 per cent of drivers in Co Kerry recorded for speeding handed in their licence for record. File photograph: Alan Betson

Two thirds of motorists convicted of speeding offences did not present their licences in court and may not have received penalty points, according to new figures.

Over the last two-and-a-half years, 12,429 people were convicted of speeding, but just 4,201 of these motorists had their licence recorded for penalty points.

Some of these motorists did not have an Irish licence, or a valid licence.

The figures, which cover January 2017 to May 2019, were released by the Courts Service to Independent TD Tommy Broughan.

Just 13 per cent of drivers in Co Kerry recorded for speeding handed in their licence for record. This figure compares to 17 per cent in Kildare, 68 per cent in Wexford and 80 per cent in Wicklow.

Susan Gray, founder of PARC (promoting awareness, responsibility and care) road safety group said they believe “repeat offenders” are not receiving penalty points and are therefore “back on our roads”.

“We don’t know where the problem lies but we would implore the Road Safety Authority and the Minister for Transport to get to the bottom of this,” she told RTÉ’s Morning Ireland on Friday.

“We’ve been attending courts for years and sending report after report on what we’re seeing to [the department of] transport, to the RSA, and as far back as four years ago Moyagh Murdock, CEO of the RSA, assured us that they were working very closely with the Courts Service and the gardaí to sort out this problem and yet four years on and the report from the Courts Service shows there’s still a massive problem.”