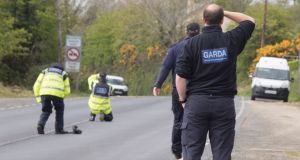 Gardaí at the scene of a fatal crash in Redcastle, Co Donegal in which two young men died. Photograph: North West Newspix

Two males in their late teens have been killed following a car crash in Co Donegal in the early hours of Saturday.

The vehicle in which the men were travelling struck a wall and then a tree on the Redcastle side of Quigley’s Point, Inishowen.

Three other males, also in their late teens, who were in the car at the time of the crash were taken to hospital but their condition is not yet known.

All five passengers are understood to be from the Buncrana area. There were no other vehicles involved in the crash.

Emergency services were at the scene of the crash overnight. The road between Quigley’s Point and Moville remains closed and diversions are in place via Moville and Carndonagh.