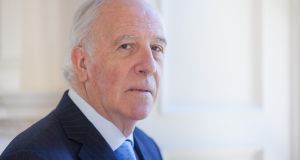 Sir Ivor Roberts: “I don’t want to find myself queuing to get through Rome airport every time I go there.”

The former British ambassador to Ireland, Sir Ivor Roberts, has formally become an Irish citizen, a move he has made because of anxieties over Brexit.

“Brexit, oh yes,” Sir Ivor told The Irish Times when asked why he applied recently for an Irish passport. “We have a house in Italy,” he added, “and I don’t want to find myself queuing to get through Rome airport every time I go there.”

The move is more than just a reaction to Britain’s imminent departure from the European Union – the subject of a summit taking place this weekend in Brussels – though that is the catalyst. It also reflects an emotional and long-standing familial connection to this island.

Sir Ivor’s grandfather, after whom he was christened, was Welsh but migrated to Liverpool to find work around the turn of the 20th century, even though at that time, he spoke only Welsh. There in the bustling port city of England’s then burgeoning empire, he met and fell in love with an Irish woman from Bootle named Tessie Moore.

Ivor snr’s heritage was Welsh Congregationalist, while Tessie, whose people came originally from Waterford, was a Roman Catholic.

“After the usual rapid courtship of seven years, they decided to get married,” Sir Ivor explained.

With the 1907/08 advent of the Catholic Church’s ne temere decree (the edit from Rome that said in mixed marriages, children should be brought up Catholic and the Catholic partner should endeavour to convert the other) such relationships did not rest easy with everyone.

“Tessie was told she should go and find herself a nice Catholic boy,” says Sir Ivor. But true love would not be denied and, around 1912, they went to Ireland “to that well known haven of religious tolerance, Belfast” where they got married.

There, they lived happily in the Oldpark area of north Belfast and Ivor snr (who at some stage converted to Catholicism) worked for Forster Green, a Quaker grocer, tea merchant and philanthropist.

In 1914, Sir Ivor’s father, Leonard Moore Roberts, was born in Belfast – and with his arrival came Sir Ivor’s right, enshrined in the Belfast Agreement, to be counted a member of the Irish nation.

“Five years later, the family moved back to Liverpool – I have never discovered why – and my father was one of the earliest pupils of a school, St Mary’s (now St Mary’s College) in Crosby where I went also,” he explained.

Leonard Roberts fought in the second World War, in north Africa and Italy, where he met and eventually married Rosa Marie Fusco, known to the family as Rosetta, Sir Ivor’s mother.

Sir Ivor himself was born in September 1946 and, with Brexit looming, he was encouraged to formalise his attachment to Ireland by his own children, one of whom lives in Australia, while another is in Dubai and a third in Rome.

“My children pushed me to do it because they are all planning to take Irish citizenship too,” said Sir Ivor who is not resiling from his UK citizenship.

“I obviously worked for the British government for 40 years and I’m not giving up my British citizenship. . . My wife Elizabeth is Australian and I may take that up too,” he quipped.

Sir Ivor, who is due to retire shortly as president of Trinity College Oxford, was Britain’s ambassador to Ireland from 1999 to 2003 and has since maintained strong personal and business relationships with people here.

“I’ve always had a soft spot for Ireland,” he said, “though not everyone in Iveagh House [the Department of Foreign Affairs] may agree with that”.