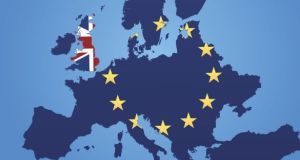 EU officials say that a statement, known in Brussels as the “Kenny text”, has already been approved in principle.

Taoiseach Enda Kenny will on Saturday ask European Union leaders to agree that, if the people of Northern Ireland vote to join a united Ireland, the “entire territory” would immediately be part of the EU.

They are expected to approve a declaration about the status of a united Ireland during a three-hour meeting in Brussels to agree a common approach to negotiations about Brexit.

The draft declaration says: “The European Council acknowledges that the Good Friday Agreement expressly provides for an agreed mechanism whereby a united Ireland may be brought about through peaceful and democratic means. In this regard, the European Council acknowledges that, in accordance with international law, the entire territory of such a united Ireland would thus be part of the European Union.”

EU officials told The Irish Times last night that a statement, known in Brussels as the “Kenny text”, has already been approved in principle by all member states and “is going to be accepted”.

The declaration, which echoes the experience of East Germany after German unification in 1990, will be recorded as a “statement for the minutes”, the equivalent of council conclusions at a formal summit.

Officials at the European institutions insist that the declaration does not imply that the EU favours a united Ireland over any other constitutional arrangement for Northern Ireland.

Downing Street declined to comment yesterday and prime minister Theresa May would not say anything about the EU’s negotiating guidelines until after they were officially approved at today’s summit.

Privately, however, British officials are relaxed about the statement, which echoes what Brexit secretary David Davis said in a letter to SDLP MP Mark Durkan last month.

The leaders are expected to take a tough approach in negotiations on Brexit, making clear that Britain cannot enjoy the economic benefits of EU membership after it leaves.

In a letter to the leaders ahead of the summit, European Council president Donald Tusk stressed that there could be no discussion about a future trade deal with Britain before sufficient progress is made on issues surrounding its withdrawal.

“This is not only a matter of tactics, but – given the limited time frame we have to conclude the talks – it is the only possible approach. In other words, before discussing our future, we must first sort out our past,” he said.

Mr Tusk identified the immediate priorities as the rights of EU citizens in Britain and British citizens in the EU, a settlement of Britain’s financial obligations, and measures to avoid a hard border between the two parts of Ireland.

1 Drug dealer loses codes for €53.6m bitcoin accounts
2 ‘IRA has gone away’: McDonald responds to Garda Commissioner’s comments
3 MV Alta: The unmanned voyage of the Ballycotton ‘ghost ship’
4 More than 25 people to sue over circulation of images taken at Dublin Garda station
5 Varadkar says any Fine Gael deal would have to recognise strength of its vote
Real news has value SUBSCRIBE