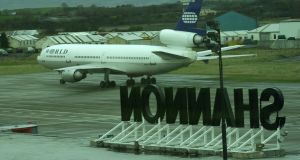 The ShannonWatch group, which campaigns against the US military using the airport, said the men were ‘peace activists’. Photograph: Frank Miller/The Irish Times

Two men were arrested on Wednesday after a suspected security breach at Shannon Airport.

The pair were detained after accessing the runway through a perimeter fence at about 6am and are expected to appear in court on Thursday.

The ShannonWatch group, which campaigns against the US military using the airport, said the men were “peace activists” taking symbolic action.

It is understood they tried to inspect a Lear jet they believed was being used by the US Air Force, which was parked at the airport overnight.

A red cross was also drawn on a taxi area as part of the protest.

It is the latest security breach by activists at the airport with the most high profile occurring in 2014 when Independent TDs Clare Daly and Mick Wallace used a rope ladder to scale a fence.

The Galway Alliance Against War, which also campaigns against US military stop-offs in Shannon, claimed a plane was taking off during the incursion.

“This incident not only highlights Ireland’s complicity in the slaughter in the Middle East and Central Asia, but how easily security at Shannon warport can be breached. It is time to end this scandal at Shannon,” a spokesman said.