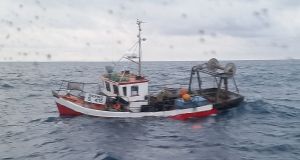 Handout photograph issued by the RNLI of a fishing boat that began sinking in the Atlantic off the west Cork coast and led to two fisherman being rescued. Castletownbere RNLI said its volunteers received a call to rescue the crew of a local fishing vessel at about 4.45am. Photograph: RNLI/PA 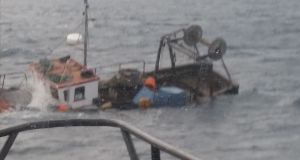 Handout photograph issued by the RNLI of a fishing boat that began sinking in the Atlantic off the coast of west Cork and led to two fisherman being rescued. Photograph: RNLI/PA

Two Spanish fishermen are recovering in Castletownbere in west Cork on Thursday morning after being rescued from the sea after their fishing vessel sank in the early hours.

The two men, who are both in their mid-30s and living locally in Castletownbere, were fishing on board their boat, the “Nepro” when she began taking in water 18km (11 miles) southwest of Dursey Island.

The pair issued a May Day signal at 4.45am and the Irish Coastguard Marine Emergency Rescue Centre in Valentia, Co Kerry, began a rescue operation, including tasking the Castletownbere RNLI.

The Castletownbere RNLI all weather boat “Annette Hutton” under coxswain Brian O’Driscoll and his crew of six, was launched at 4.55am and arrived at the scene at 5.50am.

They found the two fishermen in a liferaft and they were taken aboard the “Annette Hutton”.

The LÉ Orla and the Irish Coastguard helicopter, Rescue 115, which had also been tasked, were stood down .

Weather conditions at the time were described as good with force 3-4 winds and good visibility.

A passing freighter, the “Wilson Weber” had stood watch over the men while they were in their liferaft.

The rescued men arrived back to Castletownbere at 8am. They were medically examined and found to be safe and well.

Meanwhile, a post-mortem examination is due to be carried out on the body of of a 45-year-old man who died at Cork University Hospital in the early hours of Thursday morning.

It is understood that the man,who is from the Killeens area near Blarney, had been swimming by the weir at Ballincollig Regional Park when he got into difficulty sometime after 7pm.

He was recovered from the river and rushed by ambulance to Cork University Hospital where doctors worked to try and resuscitate him but he was pronounced dead shortly before midnight.