Two charged with murder of homeless man in Cork city 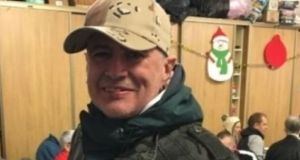 Two men have been remanded in custody after being charged with the murder of homeless man Timmy Hourihane (pictured) in Cork city last year.

Two men have been remanded in custody after being charged with the murder of a homeless man who was died following an assault in Cork city last year.

Chrisopher O’Sullivan (37), of No Fixed Abode, and James Brady (26), of Shannon Lawn, Mayfield, Cork, were charged with the murder of Timmy Hourihane (53) at Mardyke Walk in Cork on October 13th last.

Mr Hourihane died at Cork University Hospital after being found with serious head and body injuries.

Mr O’Sullivan, a native of Ballyspillane, Killarney, Co Kerry, was also charged with causing criminal damage to a tent belonging to Mr Hourihane at Mardyke Walk on the same date.

Sgt Pat Lyons said the Director of Public Prosecutions had recommended that both accused be tried before a judge and jury at the Central Criminal Court.

He sought a week’s adjournment to allow for the preparation of the book of evidence for both accused and he applied to have them remanded until next Friday. Judge Marie Keane remanded both men in custody to appear on August 28th.

Mr Hourihane was a familiar figure among the homeless in Cork, availing of services from a number of charities including Cork Simon, St Vincent de Paul and Cork Penny Dinners. He returned to Ireland following the break-up of his marriage but lapsed into alcoholism following the death of his partner, Michael from cancer.

A native of the Sheep’s Head Peninsula in west Cork, Mr Hourihane is survived by his mother Cathy, siblings Denis, Annemarie, Catherine, Nuala and Margaret and his son, Elliott.