Trial of Ibrahim Halawa in Egypt delayed for 13th time 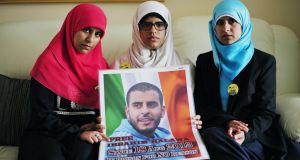 Omaima, Fatima and Somaia – sisters of Ibrahim Halawa – at their home in Dublin. Photograph: Aidan Crawley

The trial of Ibrahim Halawa in Egypt has been adjourned again. It is the 13th time the trial has been delayed, with the new date set for June 26th.

The 20-year-old, from Firhouse in Dublin, is to stand trial alongside 419 other defendants on charges that include terrorism, murder and the use of explosives. He was first arrested in August 2013 and has now spent 942 days in prison.

He was arrested at the al-Fateh mosque in Cairo during protests against the former president, Mohamed Morsi.

Mr Halawa’s sister Somaia has warned that her brother’s health is deteriorating and that he is suffering from an ongoing chest infection.

“The breathing problem is causing him to lose control of his breath which leads to him fainting,” she said. “He never suffered from chest pain and breathing issues before. Ibrahim’s physical and mental health are deteriorating without any medical treatment or monitoring.”

In an interview with The Irish Times last August, Egyptian ambassador Soha Gendi said she had done her utmost to explore all possibilities “to get the kid out of prison” in what Egypt regards as “a terrorism case”.

Ms Halawa described the ambassador’s use of the word “terrorism” when referring to her brother as “upsetting and wrong”.

“The farcical nature of the Egyptian legal system has again been highlighted as Ibrahim’s trial has been delayed for the 13th time,” said Colm O’Gorman, executive director of Amnesty International Ireland, on Sunday. “During this time, this young Irish citizen has been living in truly horrific conditions in an Egyptian prison cell. Ibrahim is a Prisoner of Conscience detained solely for peacefully exercising his right to freedom of expression and freedom of assembly. His continuing imprisonment represents an inexcusable violation of both international and Egyptian law.”

“As Ibrahim spends his 942th night unjustly incarcerated, Amnesty International continues to be gravely concerned for his mental and physical wellbeing. We reiterate our call for his immediate and unconditional release. We urge the next Irish Government to continue working on his behalf and to use every means at their disposal to secure his release.”