Families of 15 children, including an 11-week-old baby, living at entrance to waste facility 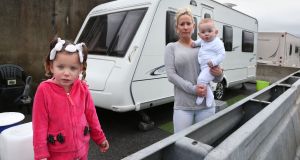 Eileen Cleary with her daughter Leona (3) and nine-month-old son Ricko: The family, along with 10 others, is due to register as homeless when the notice to quit the entrance to Barna Recycling on the Headford road in Galway comes into force on Friday. Photograph: Joe O’Shaughnessy.

Eleven Traveller families with 15 young children who have been living in caravans at the entrance to a Galway city waste facility the past six months have been issued with a legal request to vacate the site.

The families are due to register as homeless with Galway City Council at midday today when the notice to quit the entrance to Barna Recycling on the Headford road in Galway comes into force.

The youngest of the 15 children is 11 weeks old and the oldest is nine years.

The families had been in private rented accommodation, but were forced to move when the properties were required for sale, according to the Galway Traveller Movement.

John Cleary, father of four children aged between nine months and nine years, said he had been on the Galway City Council housing list for 10 years.

He said he had been offered several places to live, but felt they were not safe for rearing young children and had turned them down. He said all of his children were sick due to the conditions in which they have been living.

Mr Cleary, who said he could not work as he has a disability, was born in Ballybane, Galway.

“If we register as homeless we will be split up into separate hostels.”

Galway Traveller Movement project co-ordinator Margaret O’Riada said it was symptomatic of a wider issue relating to the housing crisis and a failure by local authorities to reach targets on Traveller accommodation.

She pointed out that four of the 15 children had special needs, with two having to go to Dublin regularly to attend the National Children’s Hospital in Crumlin.

“Homelessness is bad enough, but to degrade homeless parents and children by using forced evictions is inhumane and unnecessary.”

She called for an interagency high-level task group to be set up in Galway city to deal with what she described as the “lack of equality outcomes for the Traveller community in the area of meeting their housing/accommodation needs”.

Ms O’Riada acknowledged there was a health and safety issue in having families with young children located next to a waste facility, but said forced eviction should not be the route taken.

Galway City Council also said it could not comment on the issue.

Some 20 Traveller families live at the “transient” site and another 13 families at the “temporary site” – both located in a former landfill area next to the waste facility on the Headford road.

Local authorities have been obliged since 1998 to draw up five-year Traveller accommodation programmes.

Galway City Council’s housing list is currently at 4,600 applications, with another 400 applications with Galway County Council seeking accommodation in the city.

‘Nobody looked after me’ - woman sues over alleged misreporting of smear tests 18:13
Covid-19: About 1,500 fines issued for non-essential travel over past two weeks 18:12
Councillor takes High Court action over selection process for development board 17:55
Prominent Dublin councillor resigns from Green Party 17:43
Hitman to be sentenced for shooting drug cartel target next month 17:42