Travellers at ‘bottom of barrel’ in current accommodation crisis 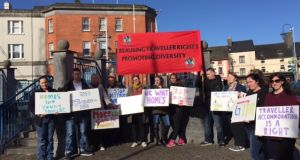 Travellers protest in Ballinasloe: “If we just had a basic upgrade, we’d be happy. But it’s as if the county council has forgotten about us.”Photograph: Galway Bay FM/Galway Traveller Movement

Travellers are at the “bottom of the barrel” in the current housing crisis, participants in a protest in Co Galway have said.

Increasing numbers of Traveller families have returned to live on the sides of roads or are forced into overcrowded house-sharing situations, members of the Ballinasloe Traveller Action Group said at a demonstration in the town on Tuesday.

“There are now different gradients of ‘terrible’ in conditions which are affecting the health of young children and their parents in particular,” said Maedhbh Moroney, a public health co-ordinator for Galway Traveller Movement (GTM).

Among those affected is Bridget Ward, a mother of six children aged between nine and 18, who has been in a temporary halting site in Capira, between Killimor and Portumna.

“We are here four years, but only one of the bays for mobile homes has electricity,” Ms Ward said. “I have two sons with young families – one with a newborn baby – in mobiles in two other bays with no electricity. And the halting site facilities are very limited, with no showers and no area for small children to play in.

“If we just had a basic upgrade, we’d be happy,” she added. “But it’s as if the county council has forgotten about us.”

She said there was no proposal in the current local authority plan to build any Traveller-specific accommodation in a county with one of the highest Traveller populations in the State.

She said that a shortage of quality private rented accommodation and discrimination by landlords meant this option was not available to many Traveller families at all. Emergency accommodation meant that families were split up, and this was not a long-term solution, she said.

In a response, Galway County Council said its Traveller accommodation programme for 2014-2018 had met the accommodation needs of 122 households to the end of August.

The council said its plan had identified the projected needs of 103 families to December this year and 173 families by 2018.

However, GTM says it has 370 families on its county database.

The council said the Traveller accommodation programme was currently the subject of a review. October 1st was the closing date for submissions, bit it said that no submission had been received from the GTM.

GTM said this was correct, but that it had been keen to engage in consultation.

Ms Moroney said the local authority is aware that a submission is being worked on and would be in very shortly.

The council stressed that support services were available to those “at risk of losing their homes”, and said that the Traveller accommodation consultative committee was an “effective forum” for “all relevant stakeholders to address issues”.

Ms Moroney said Traveller families were sympathetic to the many people affected by the housing and private rental crisis, but that Travellers had been in a crisis for a number of years.