Tipperary village goes from silent anticipation to explosion of joy

In a bar in Borris-Ileigh, reaction to second half is a mixture of surprise and celebration 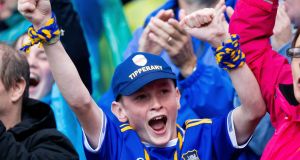 A Tipperary fans watches the final moments of the game. Photograph: Tom Honan

The village of Borris-Ileigh only ever falls silent on two types of occasion: a funeral and the morning of an All-Ireland hurling final.

On Sunday morning the atmosphere was one of silent anticipation. The place was like an abandoned film set – ornately decorated with flags and bunting, streets and buildings in perfect condition – but lacking any trace of human life until a walk through the doors of Stapleton’s Bar, the next-best alternative for Tipperary supporters unable to get to Croke Park.

One of hurling’s most famous meeting places, Stapleton’s was established in 1896, and for 123 years has acted as a confluence for hurling folk of every county, club and character.

Behind the bar on Sunday, Breda Stapleton pulled pints with flawless technique, as various members of her family have done for several generations. She was all decked out in her Tipp jersey, as were most of the crowd gathered in the bar – apart from one notable exception.

Nina Mason had the audacity to walk into Stapleton’s with a Kilkenny jersey on, proudly sporting the black and amber as if she were back in her own home village of Ballyhale. She is married to Tipperary man Tom, from just up the road in the neighbouring parish of Drom.

The symmetry was beautiful: a Kilkenny woman from Ballyhale (home of Kilkenny captain TJ Reid) married to a Tipp man from Drom (home of Tipp captain Séamus Callanan).

“The rivalry has always been fierce, even bitter, but that’s for the 70 minutes the teams are on that field. Afterwards it’s a different story. Kilkenny and Tipp respect each other, they appreciate good hurlers and that’s where the respect comes from,” said Tom.

Once the game got going so did the entire pub, but the enthusiasm immediately started to fade as TJ knocked over free after free and Tipp were mauled by Kilkenny’s intensity. And then the first big roar of the afternoon, pints spilled and crisps flying, all in support of Borris-Ileigh player Brendan Maher as he crusaded up the field and won a free. Two minutes later the roar was twice as loud when Niall O’Meara found the net for Tipp’s first goal.

The reaction to Richie Hogan’s sending-off was reflective of the respect Tom Mason talked about earlier on. Most felt the dismissal was overly harsh and that a yellow card would have sufficed.

These are hurling people, and they want to see the sport at its best: 15 on 15. Kerry woman Laura Ryan said she was a football person at heart, but having married into the hurling tradition, her husband Liam converted her to the Tipperary creed. Both were confident about Tipp’s second-half prospects, but nobody in the pub foresaw what was about to unfold.

The reaction to Tipp’s second-half sweep was a mixture of surprise and celebration. Nobody dared loosen up until the win was absolutely certain, but when it became clear Kilkenny weren’t going to break through Ronan Maher or Barry Heffernan, and that Séamus Callanan would lift the Liam McCarthy Cup, the place exploded.

For Pat Ryan, the red card was harsh but the end result was justified.

“Of course there will always be ifs and buts, that’s the way it is. I think we would have got on top of them anyway. We were on top just before the red card and we looked like a team who had the game under control. It was there for the taking and we took it.”