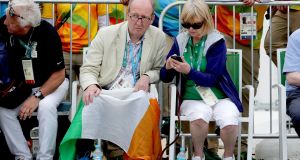 THG Sports, the agency that employs an Irish man arrested in Rio de Janeiro for alleged Olympic ticket touting, manned the telephone lines at certain times of the day for the Irish authorised tickets dealer, Pro10 Sports Management but was not paid for doing so.

In response to queries from The Irish Times, Lucan-based Pro10 clarified what it said were the reasons why its Olympic tickets hotline, a Dublin telephone number, was redirected to the offices of the UK-based Marcus Evans group, the owner of THG.

THG is not the authorised reseller or distributor of tickets for the Olympic Council of Ireland (OCI) for Rio, although it held the contract for the 2012 London games.

However, it has been dragged into controversy over recent days after one of its executives, Kevin Mallon, was arrested in Rio carrying tickets that appear to have come from the OCI and Pro 10 allocations.

Pro10, which was established by two Irish football agents and a Dublin mortgage broker shortly before being awarded the Olympic ticketing contract, says it handled all Rio ticket enquiries itself during Irish office hours.

“Outside of these hours, and because of the time difference between Ireland and Brazil, the Pro10 phone line diverted to the THG phone line as this phone line was manned round the clock and could deal with any collection queries [in Rio] for Pro10 customers,” it said.

“As a THG employee was assisting with ticket collection, this would ensure customers could access information on how to collect the tickets they had paid Pro10 for if a Pro10 employee was not available to provide them with the collection details.”

On Monday, Pro10 told The Irish Times it was puzzled as to how a reference to Marcus Evans appeared on the phone line as it had been shut down.

Pro10 has previously explained Mr Mallon’s possession of the tickets by saying he was acting as a point of contact for its customers who needed to pick up tickets in Brazil. Authorities there, however, allege he was selling tickets at inflated prices, which THG has denied.

Pro10 insists it has no commercial relationship with THG and the UK company was not paid for manning its phone lines. It also insists neither THG nor Mr Mallon were paid for acting as the point of contact for tickets collection for Pro10 customers in Rio.

The OCI has not answered detailed queries about the circumstances of its awarding of the Rio ticketing contract to Pro10. OCI also failed to answer queries about whether the tender was advertised, or if any other companies were invited to bid.

Despite apparently having no experience in the ticketing area, Pro10 was the only bidder for the contract that was previously held for London by THG.

Meanwhile lawyers acting for Mr Mallon, who was arrested on August 5th, are intensifying their efforts to secure his release from prison. After the superior court of justice in Brasília denied a request for habeas corpus on Monday, his legal team turned to Brazil’s supreme court filing a writ there while still contesting Monday’s decision.

His lawyers are also seeking to have the Rio court that ordered Mr Mallon’s detention revoke its decision based on what his lawyer Frankllin Gomes said was new evidence that proves “the nonexistence of any type of crime practised by Kevin”.

1 Storm Dennis washes abandoned ‘ghost ship’ onto rocks off Co Cork
2 Forget a grand coalition – here is what the next government will most likely look like
3 Over 2,000 buyers bid for first affordable homes planned for south Dublin in years
4 Caroline Flack death: Public disquiet over media conduct grows
5 Fine Gael faces internal resistance to a grand coalition with FF and Greens
Real news has value SUBSCRIBE