The Question: Why are iPhone sales falling? 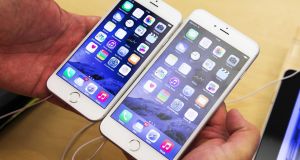 The exceptional sales in the year-ago quarter was because of pent-up demand for large-screen iPhones. Photograph: Vincent Jannink/EPA

On Tuesday, Apple released its quarterly results. For the first time in 13 years it announced a decline in revenue and profits. And not just a slight decline: in a case of ominous symmetry, revenue was down 13 per cent. The market gods were not happy, sending Apple stock down 7 per cent in after-hours trading.

Admittedly, Apple’s revenue was a whopping $50.6 billion (€44.68 billion), with profits of $10.5 billion. Still, 13 years of ever-expanding revenues is quite a streak, and it had to end some time, so what was behind the sharp fall?

In one word, iPhones. The smartphone constitutes about two-thirds of Apple’s business, but it only sold 51.2 million of them last quarter, down 10 million units from the same period the year before.

The exceptional sales in the year-ago quarter was because of pent-up demand for large- screen iPhones – rival Android phone manufacturers had been eating into Apple’s share of the high end with ever larger handsets, and finally Apple relented with the massively popular iPhone 6 and 6 Plus.

Furthermore, in previous years Apple was artificially constraining its markets by often partnering with smaller mobile phone networks in various countries, leveraging the popularity of the iPhone to get better deals than it might get with the largest operator. That kept margins high while leaving some headroom for growth. But by last year, Apple had partnered with basically every major operator, in particular China Mobile.

So this year, with no new, bigger iPhone, and no new markets or operator deals to allow for further market growth, sales hit their saturation point.

Apple appears to have hit a growth ceiling for now, with no obvious successor device to take up the slack. Still, a degree of perspective is also required: Apple made more profit in the last quarter than Alphabet (née Google), Facebook and Microsoft combined

Needless to say, an awful lot will be riding on the success of the iPhone 7, due in September. If it doesn’t offer significant enough reasons to upgrade, the argument that Apple might be facing long-term stagnation will begin to look a good deal more convincing.